Probably the holiest sight in all of Eretz Yisroel, second only to the Har Ha’Bayis, is the Meoras Ha’Machpelah-the burial place of our Avos and Imahos Ha’Kedoshim- located in the biblical city of Chevron. 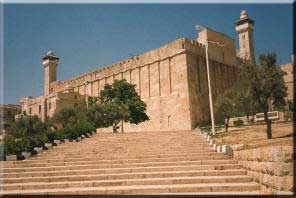 Each morning, someone would stand on the rooftop of the Bais Ha’Mikdosh to see if it was already light enough to shecht (slaughter) the Korban Tomid, a sacrifice brought every morning and evening. As soon as he would cry out that it was already bright over the city of Chevron, they would begin the process of shechting the Korban Tomid. This was done in order to begin the day by mentioning the great merits of our holy Avos who are buried there. 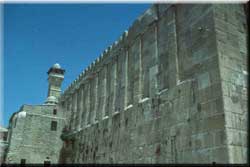 Three times a day we begin our shemone esray by mentioning the merits of our forefathers who are buried here. It was to this holy site that Kolev went to pray that he be spared from following the misguided advice of the ten meraglim. 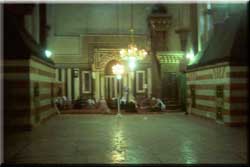 The Medrash tells us that when the three angels came to visit Avrohom Avinu, he went to get some young bulls to shecht for them. One of them ran away and he gave chase. It soon led him into a double cave in which he saw Adam and Chava buried. When his wife Sarah died, he bought the entire field from Efron for 400 silver shkolim. Later on, he as well as Yitzchok, Rivkah, Yaacov and Leah, were buried there. When Esav tried to stop the Shevotim from burying Yaakov, Don’s son Chushim, cut off his head which then went rolling down into the cave.

It is called the Double Cave-Meoras Ha’Machpelah- for various reasons. Some say that it is because of the pairs-the Avos and Imahos- that lie buried here. Others say that the cave was constructed as a double cave. Some say it was a cave within a cave, while others say it was a cave above a cave.

During the years that the Arabs had control of this holy site, they did not permit any Jews to pray inside it. Jews were only allowed up to the seventh outside step.

The large building presently standing above the kevorim is the oldest building in the entire country and was built by Hordus (Herod). One can notice that the stones at the bottom resemble the bottom stones of the Kotel. These are known to be Herodian stones which are easily identifiable.

Inside this large structure there are three rooms. The largest of the rooms has two monuments inside it, one for Yitzchok and the other for Rivka. This is also the room in which the Arabs have their mosque where they pray. At present this hall has been closed off and only Arabs are allowed to enter it. Alongside it is a much smaller room where one sees two monuments; one for Avrohom and the other for Sarah. Then one crosses a small courtyard and enters a small room with the monuments of Yaakov and Leah.

The actual caves below are, of course, sealed shut so that no one can enter them.