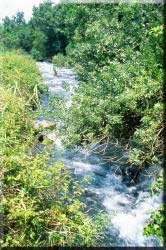 All the way up north, only a little before we reach the Chermon mountains, we come to a beautiful nature reserve with gorgeous trails leading through dense forest, streams and the Chatzbani river. This is the site where the tribe of Dan once lived. The story of how it was captured is told in detail in Shoftim (perek 18) . The site was discovered by a group of five explorers from the shevet of Dan. They then sent 600 soldiers to capture this city from the Tzidonim who inhabited it. Its original name was Layish, which means Lion (perhaps because it was inhabited by lions). On their way they also took along the idol known as “Pesel Micha”, as well as its priest, Yehonoson. They easily overpowered the Tzidonim, captured it for themselves and renamed it Dan. Here they also found an expensive stone called Leshem which was the stone upon which their Shevet’s name was inscribed upon on the Choshen. This now became the northernmost dwelling place of the Jews, as we find many a time “from Dan to Be’er Shevah”- Dan was the Northernmost point while Be’er Sheva was the southernmost point.

When the Jewish kingdom was divided into two parts and Yerovom ben Nevot ruled over the ten tribes this became one of the two places where he set up a golden calf and turned it into a place of worship in order to prevent people from going to Yerushalayim. (The second idol was set up in Bais El).

Extensive archeological digs in the area have uncovered much of this ancient city along with the mizbayach that once stood here. Many of the finds can be seen in a museum nearby.