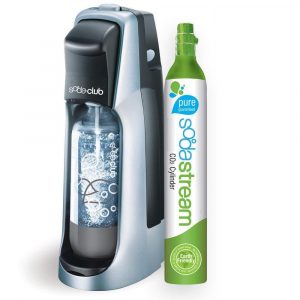 This really should be two separate posts, but I felt that the topic of SodaStream covered both such that I chose to include it in one post.

SodaStream was founded in 1991 in Israel. The product is so Jewish that it’s tag line on the website is “set the bubbles free,” a clear reference (to me, at least) to Moses’ “let my people go.” I remember seeing/experiencing as a kid when visiting my mother, who just received it as a gift, in Israel in 1992/1993 and honestly thought it was the coolest thing in the world. Imagine: unlimited seltzer! Well, I later found out that it depended on what the gas tank provided, but still, is each gas tank serves up to 60 liters and costs $35 a tank, that comes out to almost half the cost of a full bottle. Not only that, but you can add your own syrups to make whatever sodas you wanted.

SodaStream and Halacha – It’s Use on Shabbat

Due to it’s innovative mechanics, one of the concerns I had was it’s use on Shabbat. It’s already Kosher based on their website FAQs page:

“SodaStream products are kosher (OU) certified (click to see OU certificate). SodaStream seltzer is kosher for passover (click to see OUP certificate). Also, please note that your home soda maker can be used on the Sabbath. For more information, please contact us send an email to info@sodastreamsupport.com or call 1-800-763-2258.“

I looked online to see if other people had used it. I found that R’ Shlomo Zalman Auerbach had already permitted it: 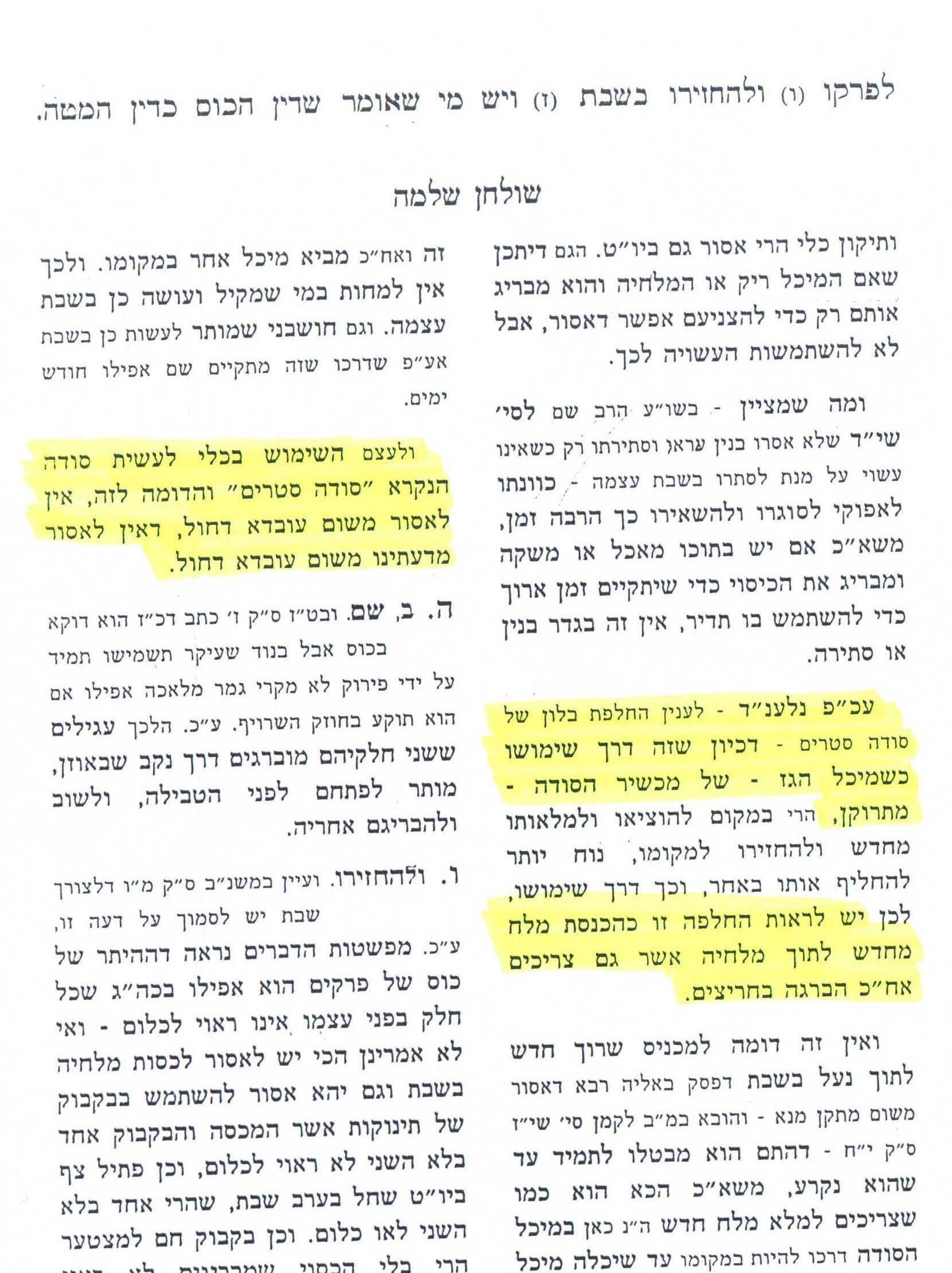 So it appears R’ Shlomo Zalman Auerbach allowed it. I haven’t heard any other opinions on the matter. Though if you wanted to be thorough, you could ask a British Jew, as according towikipedia, “In the UK (where it was first sold) the SodaStream machine is strongly associated with 1970s/1980s childhood nostalgia.”

Being that this was online (with potential to have been made up) I asked Rabbi Yaakov Felder about this. He asked me to bring it in which I did (pictures wouldn’t work, he had to see it first-hand. After 5 minutes of examining it, he concluded that the device I had (without a light) may be used on Shabbos. It’s not powered by electricity (it’s by gas) and the only possible question was, if the gas tank connects to the device, does that constitute creating a new kli (vessel). Ultimately it was decided that no new kli was being created, thereby permitted it’s use. In his words, “use it be-gezunte heit.”

The only issue would be with SodaStream models that have a light. Being that that light is powered by electricity, it’s clear that those models cannot be used on Shabbos.

SodaStream and the Recent Boycott

On a more serious note, Scarlett Johansson, a fellow Jew on the merit of her mother, recently endorsed SodaStream, becoming its brand ambassador, and received harsh criticism for it. Not only that, but many Arab countries have decided to boycott SodaStream, an already-Israeli product because of that. Ironically, Arab news sources are already complaining that this boycott will affect Palestinian workers. Let me get this straight: Israel will hire Palestinian workers at potential risk to the security of their own country, yet Arabs will spit at the Israeli-made product at the risk of their own brethren becoming unemployed?!? Is there something I’m missing?