Exhibit 24a- Our Wall is Blocked.
Remains of the entire length of the Western Wall are still in place; however, the stones in the northern half of the Kosel are blocked by the Arab homes that are built up against the wall. 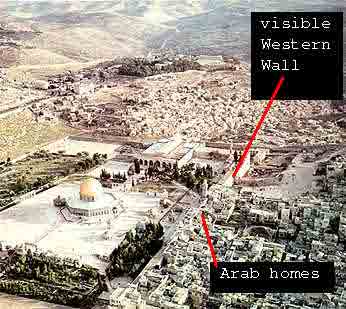 Exhibit 24b- The Stones can be Seen.
Two decades ago, Israeli excavators began tunneling underneath the Arab homes in order to expose more of the Western Wall. Note the Herodian margins on each block to the right. 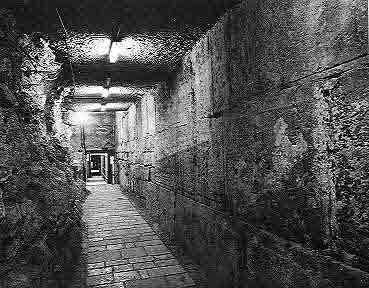 Exhibit 24c- Great Blocks.
As the digging progressed, new and larger blocks were revealed. Some of the massive ashlars weighed over 400 tons. These are the largest building block ever to have been used in construction. 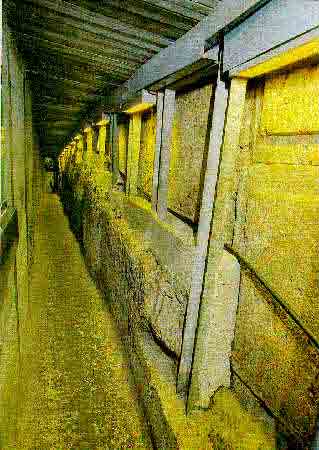 Exhibit 24d- Columns.
The tunnel was enlarged, exposing the original street, and two columns from a building on the other side of the street. The style of these columns are Doric and date back to the Hasmonean or Maccabbean era, about 135 BCE. The tunnel has been nicknamed the Hasmonean Tunnel. 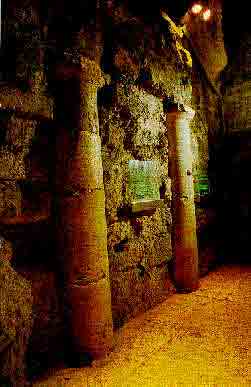 Exhibit 24e- The Tunnel that Isn’t.
Of course, in the time of the Bais HaMikdash there was no tunnel right here. This was open street. Today, because the excavators had to tunnel under the Arab homes it does seem to be some ancient tunnel. 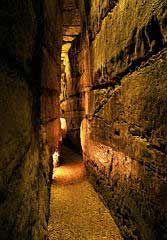 Exhibit 24f- Struthion Pool.
At the end of the tunnel is a pool called the Struthion Pool. The first century CE historian, Josephus Flavius, tells that the evil Roman commander, Titus, stationed his fifth legion near this pool before the final attack on the Bais HaMikdash began. 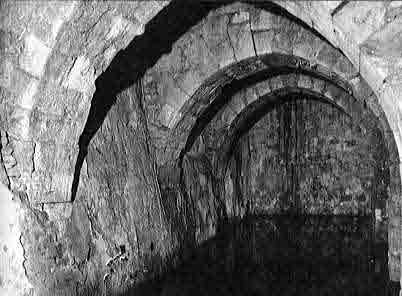 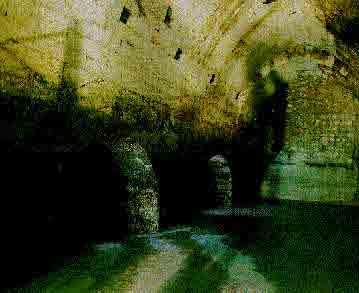 Exhibit 24h- The Catacombs.
Under Bridge Street, there is a network of underground tunnels, called catacombs. Who built them, when they were built, and why they were constructed is not known. It is know that the Crusaders used them as stables. Many archeologists think they date back to the time of the Bais HaMikdash. 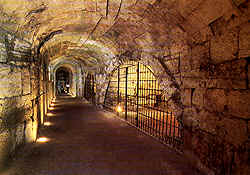 Exhibit 24i- Underground Building.
Towards the end of the nineteenth century an underground building was discovered. It is under the open plaza in front of the Kossel and dates back to the time of Herod (Hurdos). The function of the building is not know. Many historians suspect that this is the famous Xystos Building that Josephus Flavius mentions several times. However, Josephus never stated the function of the Xystos Building. 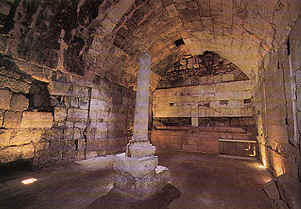 ← Qwerty Keyboards and Jewish Traditions
Room 25 – The “Kiphonus Gate,” a Temple gateway mentioned in the Mishna →