Exhibit 40a- Mysterious Arch. On the southern portion of the Eastern Wall are some stones springing out, very similar to Robinson’s Arch stones. In fact it is directly across from Robinson’s Arch. (See Room 19.) This arch also supported a stairway. But, whereas the Robinson’s Arch stairway led onto the top of Har HaBayis, this led into the “basement of the Bais HaMikdash. Why this archway was made and when it was used is not known. An easy access to the basement was through the Triple Gate to the south. It is also quite odd that this feature has no archaeological name.
Where the steps lead down to, cannot be guessed since the ground is very sloped along the Eastern Wall. It is a steep 300 foot drop to the Kidron Valley below. 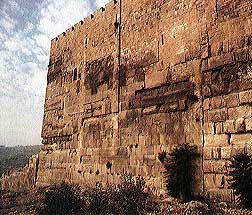