Because Christianity offers the second-most credible claim of any world religion, we opted to provide its most traditional branch — the Catholic Church — with an opportunity to respond to some of our critical observations.  In early December, 1995, we forwarded the following three questions to Pope John Paul II:

(2) We find the genealogy of Jesus provided by the Gospels confusing. Who was Jesus’ paternal grandfather? (We notice that Matthew says that his grandfather was Jacob, but Luke says it was Heli). Also, we notice that Matthew declares that Jesus was separated from King David by only twenty-eight generations, but Luke’s list shows a forty-three generation separation. What does this contradiction mean?

(3) The genealogical line linking Jesus and King David seems to pass through Jesus’ father. But since Jesus was the product of a virgin conception, then he does not share in his father’s Davidic ancestry. How is Jesus a descendent of David?

In a letter from the Vatican dated 19 December 1995, the Pope’s Assessor, Monsignor L. Sandri, responded in the Pope’s name.  Monsignor Sandri declined to answer our questions, but informed us that the members of the French Dominican Fathers’ Ecole Biblique in Jerusalem would probably provide satisfactory explanations.

Through facsimile communications, we forwarded our questions to the Ecole Biblique.  In a facsimile transmission dated 11 January 1996, Marcel Sigrist, the institute’s director, also declined to answer our questions, but suggested that answers could be found in the world of Raymond E. Brown, a well-known Catholic theologian currently on the staff of Saint Patrick Seminary in Menlo Park, California.

Again through facsimile communications, we forwarded our questions to Dr. Brown.  In a letter dated 22 January 1996, Dr. Brown referred us to writings of his held by the library of the Ecole Biblique in Jerusalem.

(The correspondences from Pope John Paul II, Marcel Sigrist, and Raymond Brown are reprinted at this appendix’s conclusion.)

On 2 February 1996 we visited the Ecole Biblique and examined Dr. Brown’s writings.  As Dr. Brown suggested, his writings did address our questions.  Here we will summarize the answers we found there.

I.  Post-Resurrectional Appearances: Galilee or Jerusalem?

In an essay carrying the Nihil Obstat and Imprimatur (official declarations by the Catholic Church that a book is “free of doctrinal or moral error”), Brown admits that the apparent contradiction in records of the post-resurrectional appearances is real.  “It is quite obvious,” Brown writes, “that the Gospels do not agree as to where and to whom Jesus appeared after his resurrection.”[1]  “Just as the Jerusalem tradition leaves little or no room for subsequent Galilean appearances,” explains Brown, “the Galilean narratives seem to rule out any prior appearances of Jesus to the Twelve in Jerusalem.”[2]  Citing immense textual evidence, Brown then declares his disapproval of the simples solution to the contradiction:  “We must reject the thesis that the Gospels can be harmonized through a rearrangement whereby Jesus appears several times to the Twelve, first in Jerusalem, then in Galilee.”[3]  Rather, concludes the Church spokesman, “Variations in place and time may stem in part from the evangelists themselves who are trying to fit the account of an appearance into a consecutive narrative.”[4]  Brown makes clear that the post-resurrection appearance accounts are creative, substantially non-historical attempts to reconstruct events never witnessed by their respective authors.

In the same essay, Brown observes that “the lists of Jesus’ ancestors that they [the Gospels] give are very different, and neither one is plausible.”[5]  Brown takes the surprising position that “because the early Christians confessed Jesus as Messiah, for which ‘Son of David’ was an alternative title, they historicized their faith by creating for him Davidic genealogies and by claiming that Joseph was a Davidide.”[6]  In another essay, also carrying the Church’s Nihil Obstat and Imprimatur, Brown expands upon this proposition:

Increasingly, the  purported descent from David is explained as a theologoumenon, i.e., as the historicizing of what was originally a theological statement.  If I many give a simplified explanation, the process of historicizing Davidic sonship is though to have gone somewhat in the following way:  the Christian community believed that Jesus had fulfilled Israel’s hopes; prominent among those hopes was the expectation of a Messiah, and so the traditional title “Messiah” was given to Jesus; but in Jewish thought the Messiah was pictures as having Davidic descent; consequently Jesus was described as “son of David”; and eventually a Davidic genealogy was fashioned for him.[7]

Brown explains that Matthew probably created fictional genealogical links back to Abraham and David also “to appeal to the mixed constituency of his [Matthew’s] community of Jewish and Gentile Christians.”[8]  As evidence that Jesus was really not a descendent of David at all, Brown points out that:

There is not the slightest indication in the accounts of the ministry of Jesus that his family was of ancestral nobility or royalty.  If Jesus were a dauphin, there would have been none of the wonderment about his pretensions.  He appears in the Gospels as a man of unimpressive background from an unimportant village.[9]

Brown  goes even further, calling into question the reliability of large sections of the New Testament.  He encourages his readers to face the possibility that portions of Matthew and Luke “may represent non-historical dramatizations:”[10]

Indeed, close analysis of the infancy narratives makes it unlikely that either account is completely historical.  Matthew’s account contains a number of extraordinary or miraculous public events that, were they factual, should have left some traces in Jewish records or elsewhere in the New Testament (the king and all Jerusalem upset over the birth of the Messiah in Bethlehem; a star which moved from Jerusalem south to Bethlehem and came to rest over a house; the massacre of all the male children in Bethlehem).  Luke’s reference to a general census of the Empire under Augustus which affected Palestine before the death of Herod the Great is almost certainly wrong, as is his understanding of the Jewish customs of the presentation of the child and the purification of the mother in 2:22-24.  Some of these events, which are quite implausible as history, have now been understood as rewritings of Old Testament scenes or themes.[11]

Brown’s most extreme statement in this regard, appearing in the same essay, suggests that the Pope himself might reject the historicity of the resurrection altogether:

It was this interaction [of the eschatological and the historical] that Pope Paul pointed to in the same address when he spoke of the resurrection as “the unique and sensational event on which the whole of human history turns.”  This is not the same, however, as saying that the resurrection itself was a historical event, even though editorial writers quoted the Pope’s speech to that effect.[12]

It is crucial to remember (a) that these words appear in an essay carrying the Church’s approbation; (b) that they were written by a scholar whose works were endorsed by the Ecole Biblique; and (c) that Ecole Biblique is the institution that we were referred to by Vatican authorities.

Brown mentions the possibility that “early Christians” might have imported a mythology about virginal conception from “pagan or [other] world religions,”[16] but never intended that that mythology be taken literally.  “Virginal conception was a well-known religious symbol for divine origins,” explains Brown, citing such stories in Buddhist, Hindu, Zoroastrian, Greco-Roman and ancient Egyptian theologies.[17]  He proposes that early Christians “used an imagery of virginal conception whose symbolic origins were forgotten as it was disseminated among various Christian communities and recorded by evangelists.”[18]

Alternatively, Brown also considers the possibility that Christianity’s founders intended to create the impression that an actual virginal conception took place.  Early Christians needed just such a myth, Brown notes, since Mary was widely known to have delivered Jesus too early: “Unfortunately, the historical alternative to the virginal conception has not been a conception in  wedlock; it has been illegitimacy.”[19]  Brown writes that:

Some sophisticated Christians could live with the alternative of illegitimacy; they would see this as the ultimate stage in Jesus’ emptying himself and taking on the form of a servant, and would insist, quite rightly, that an irregular begetting involves no sin by Jesus himself.  But illegitimacy would destroy the images of sanctity and purity with which Matthew and Luke surround Jesus’ origins and would negate the theology that Jesus came from the pious Anawim of Israel.  For many less sophisticated believers, illegitimacy would be an offense that would challenge the plausibility of the Christian mystery.[20]

In summary, Brown leans towards a less miraculous explanation of Jesus’ early birth.

[18]  The Virginal Conception and Bodily Resurrection of Jesus, p. 61. 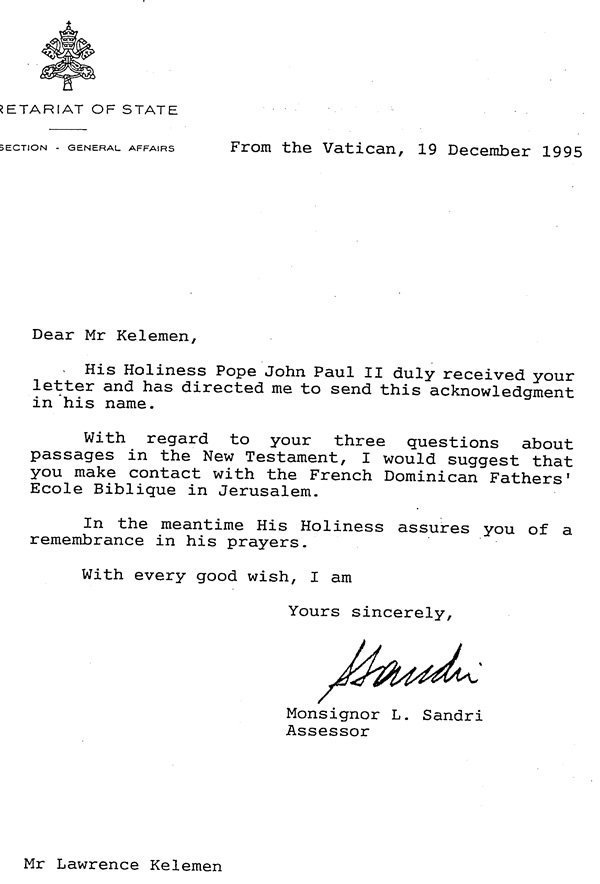 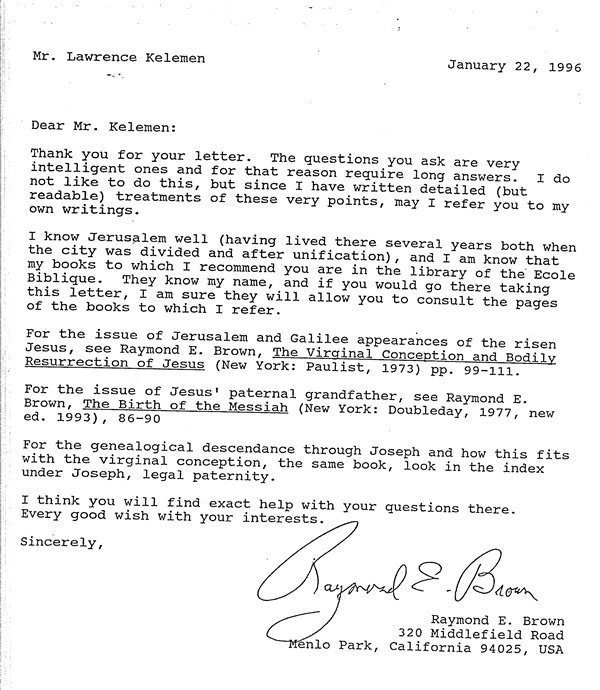 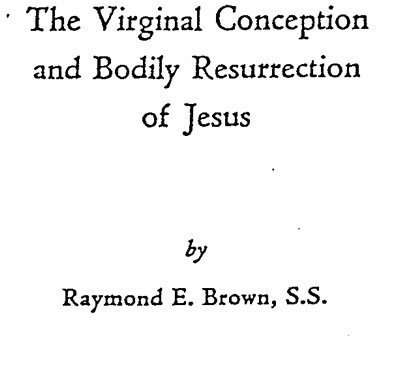 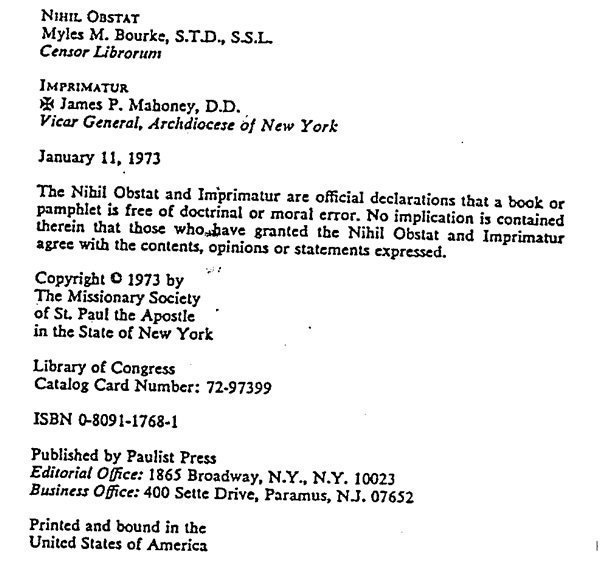 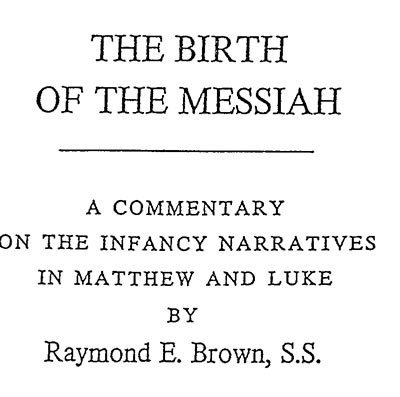 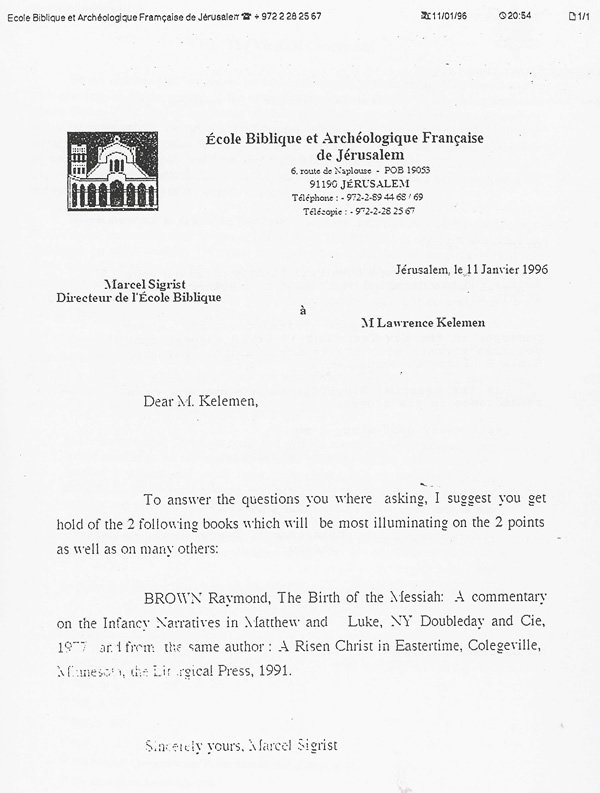 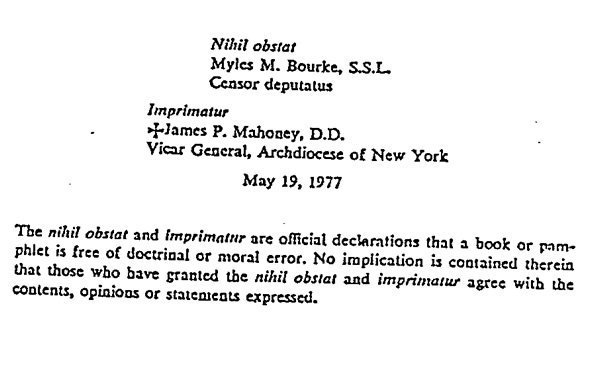