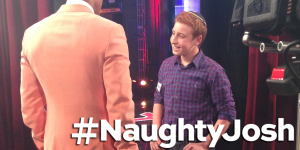 Josh Orlian, a 12-year-old standup comedian, made his comedy debut on America’s Got Talent, and gets naughty with penis jokes, discussing sword swallowing and nut allergies.

I’m not here to state the obvious. The fact that this was a big Chillul Hashem is a given. I sort of “get” that this made us look “normal” in the eyes of the Goyim, but we don’t need to lower our standards. Don’t get me wrong: we all think these things, but it’s another thing to put it out in a public forum, especially in front of parents. You are exposing yourself to Goyim and represent all Jews when you wear a Kippa on your head making those jokes, for all Goyim to see.

The actual joke here wasn’t in the performance, believe it or not. Rabbi Eliyahu Fink mentioned that the real joke was that the Orlains are close friends with fellow Jewish comedian Elon Gold. Elon Gold, according to Rabbi Fink, was the one who personally mentored Josh, and actually told him to take his Yarmulke off while performing because it would be distracting and would reflect poorly on Orthodox Jews. Not only did he perform with the Yarmulke on, it happened to be the Yarmulke he received at Elon Gold’s sons’ Bar Mitzvah (if you notice the Yarmulke there are initials “B.G.” – G is Gold, B I don’t know)! Now that’s funny.

Again, there’s a time and place. Being in front of Goyim like that, with the parents approving of those jokes, is not only not the time or place, it’s just plain distateful.

← Recap: Gilad Schalit’s Capture: In His Own Words
WHEN A FLY FALLS INTO A CUP OF COFFEE →