Shortly after rocket alert sirens were sounded on Friday morning across central Israel, including at the Ben-Gurion International Airport, Hamas’ armed wing has warned airlines that it intends to target the airport with its rockets from Gaza and has told them not to fly there. 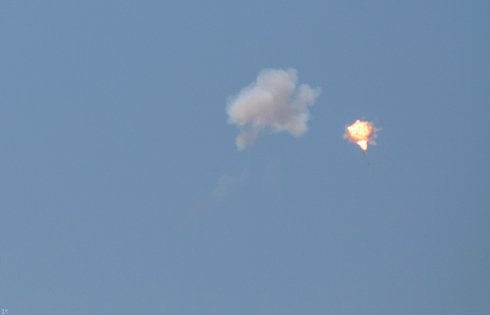 “In the light of Israel’s … attacks on the residents of Gaza Strip … The armed wing of Hamas movement has decided to respond to the Israeli aggression and we warn you against carrying out flights to Ben Gurion airport, which will be one of our targets today because it also hosts a military air base,” a statement from the group said.

The militant group said it had issued the warning to the airlines so that they could avoid injury to their passengers.

Earlier, Hamas said that the rocket barrage at central Israel was their first deliberate attempt to hit Ben-Gurion Airport. The organization said that four M-75 rockets were fired at the airport.

But projectiles launched by Gaza militants are largely inaccurate and there have been no reports of any landing in or close to the airport, located in an area covered by the Iron Dome system.

A spokesman for Israel’s airport authority said that a siren had sounded at Ben-Gurion and that all activity had stopped for about 10 minutes, but that the siren was part of a general alert in the Tel Aviv area and not a direct threat to the airport.

Three rockets fired from the Gaza Strip towards central Israel were intercepted by the Iron Dome missile defense system over the Tel Aviv area on Friday morning.

Prior to the rocket fire, the rocket alert siren was sounded at around 10:45am in Tel Aviv, Givatayaim, Ra’anana, Herzliya, Bat Yam, Rehovot and other cities in the area.

A synagogue in Tel Aviv, that was closed for renovations, was hit by shrapnel of one of the rockets intercepted by the Iron Dome. No one was inside the synagogue when the shrapnel fell.

The synagogue’s manager, Michael Biton, said that renovations had just finished. “There was a cleaner here this morning right when it happened. She started cleaning, heard the siren and left (to take cover). Right when she left, the rocket (shrapnel) fell and fortunately she was saved.”

← Orthodox Jews – And All Jews – Owe President Obama a Big ‘Thank You’
Jewish Kids Play Soccer, Have Water Gun Fights, and Hang Out on Playgrounds…Our Enemies Play Kidnappers and Victims →