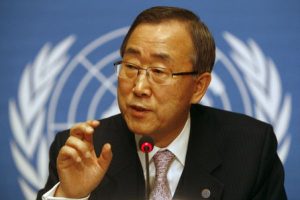 Speaking during meeting with students in Jerusalem, Ban Ki-moon says Jewish state sometimes discriminated against due to Mideast conflict

United Nations Secretary-General Ban Ki-moon met with students at the UN headquarters in Jerusalem on Friday afternoon, and admitted that his organization was biased against Israel.

Responding to a student who said Israelis felt their country was discriminated against in the international organization, Ban confirmed that there was a biased attitude towards the Israeli people and Israeli government, stressing that it was “an unfortunate situation.”

Ban met with the students as part of the UN Model international academic convention initiated by students at the College of Management.

He told them he had come to the region for the sixth time to express his support for the renewed peace talks between Israel and the Palestinians. “I have never been this optimist,” he said, adding that the international community had never had such expectations and hope that the peace process would reach a solution.

Addressing the attitude towards Israel, Ban said that the Jewish state was a UN member and should therefore be treated equally like all other 192 member states. Unfortunately, he added, Israel has been criticized and sometimes discriminated against because of the Mideast conflict.

A peace process is just a piece of paper, he said, adding that the Oslo Agreement was never implemented and remained a piece of paper. “This time I expect real peace,” he said. “The Israeli and Palestinian people are neighbors and have no choice but to live in harmony and peace side by side.”

Asked about the split between Fatah and Hamas, the UN chief responded that reconciliation between Israel and the Palestinians was highly important. “There can be no solution of three states – the State of Israel and two Palestinian states. The vision is of a two-state solution, and that’s the reason we are trying to advance a Palestinian reconciliation process,” he said.

Earlier Friday, Ban met with Prime Minister Benjamin Netanyahu, who told him that the root of the Israeli-Palestinian conflict was the refusal to recognize the Jewish state “on any border” and had nothing to do with Israel’s settlement enterprise.