In the fighting between the IDF and terrorists in Beit Hanoun in northern Gaza, Staff-Sgt. Avraham Grintzvaig HY”D, 21, of Petach Tikvah, a Nachal Brigade soldier and Staff-Sgt. Gal Bason HY”D, 21, of Holon fell in battle. 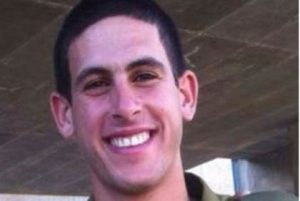 Bason studied in Holon, opting for an athletic track. He completed his studies with excellence. Prior to enlisting into the IDF he was part of an Israeli Arab delegation in Germany promoting dual existence and dialogue. He entered the IDF joining Sayeret Yahalom; the elite unite of the combat engineers. He is survived by his parents, a brother, sister and companion. The two were killed when a Nachal force entered what appears to have been a booby trapped house. An exchange of gunfire with terrorists took place and explosives were detonated. A number of terrorist were killed in the battle too.

Lt. Roy Peles HY”D, 21, of Tel Aviv was killed in another battle, also in Beit Hanoun. An anti-tank rocket was fired at Nachal Brigade soldiers. Roy completed officers training four week ago was placed in charge of a platoon of Orev, a unit in Nachal. His family told the media they last heard from him last week after it was announced 13 soldiers were killed. He phoned to inform them he was not among them.

Other soldiers killed in battle over Shabbos include Staff-Sgt. Amit Yeori HY”D, 20, of Yerushalayim. He was killed on Friday night in Gaza fighting. Staff-Sgt. Guy Boyland HY”D, 21, of Kibbutz Genosar.