Intelligence is good ‘but we won’t find them all,’ warns ex-commander of elite unit that tackles the cross-border passageways 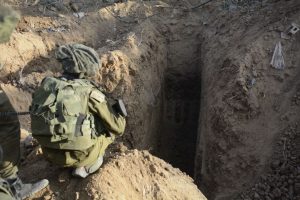 Israel will not find all of the cross-border tunnels in Gaza during this operation. And if Hamas is able to secure ceasefire terms that give it sufficient room to do so, it will commence digging anew after this conflict is over, a former senior commander in the IDF’s Combat Engineering Corps said Sunday.

“We won’t find all of them,” said Col. (res) Atai Shelach, former commander of the elite Yahalom unit that tackles the tunnels, “and the moment we leave. they will start digging again.”

The Israeli army has found more than 30 tunnels that cross underground from Gaza to Israel. The channels are often wider than a man’s shoulders and close to six feet high; they are supported with hundreds of tons of concrete arches and frequently reach a maximum depth of 20 meters below ground level. Most of the tunnels are well lit and properly ventilated. Soldiers on the ground in Gaza have reported finding explosives and arms stashed within the tunnels and, on several occasions after thwarting underground infiltration attempts, have found Hamas operatives armed with zip ties and narcotic drugs meant to facilitate a kidnapping.

Security sources assert that the tunnels were built for a mega-attack to be carried out during the Jewish New Year, in September, the Israeli news site NRG reported on Friday. The attack was to include 200 terrorists simultaneously surging across the border and seizing control of six civilian communities in the western Negev, NRG reported.

Shelach said in a conference call arranged by The Israel Project that tunnels have been in Gaza for two decades and that they are “actually part of the culture.” He said that at first the tunnels were used primarily for smuggling and then for an economic industry dominated by several families. Only later did the tunneling intensify, at first against Israeli troops inside Gaza, and, after the Israeli withdrawal from Gaza in 2005, against troops on the Israeli side of the border.

In June 2006 Corporal Gilad Shalit, a soldier in the armored corps, was kidnapped from a tank in an ambush launched from a cross-border tunnel. Shelach said Israel’s intelligence has known about the tunnels for a long time, including during Operation Pillar of Defense in November 2012, when the government opted for a ceasefire after eight days of aerial warfare rather than address the tunnel threat.

IDF spokesman Lt. Col. Peter Lerner recently described the network of defensive and offensive underground tunnels in Gaza as akin to arteries and veins, crossing the length of the Strip and feeding one another.

Shelach put the total number of tunnels in Gaza at “between hundreds and thousands.”

He said military intelligence has provided “a very good picture” of the extent and location of the tunnels prior to this operation and that Hamas operatives taken captive, “if I may say, are answering questions.”

He said completing the destruction of the several dozen tunnels crossing into, or toward, Israel was “just a matter of time” and that there was “no other obstacle.”

The work is dangerous when performed in a combat zone, but can be done from the outside of the tunnel, drilling holes into the surface with heavy machinery and inserting the explosives into the tunnel.

Hamas, he noted, pays families near the border “to hire” a room in their homes from which operatives then begin carefully digging a tunnel shaft within the house. “One of their tools,” he said, “is to use the population for their own purposes.”

Read more: Hamas will restart tunneling as soon as we leave, IDF officer says | The Times of Israel http://www.timesofisrael.com/hamas-will-restart-tunneling-as-soon-as-we-leave-idf-officer-says/#ixzz38hm4kLOM
Follow us: @timesofisrael on Twitter | timesofisrael on Facebook