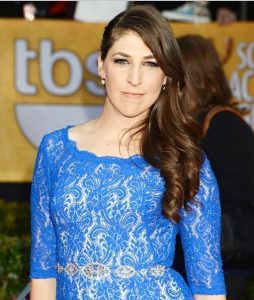 The Jewish actress and outspoken supporter of Israel wrote a brief blog post Wednesday afternoon, titled “Why I Donated Money to Send Bulletproof Vests to the IDF.”

“1. I need to feel like I’m doing something,” she writes.

“2. No matter what your politics are, soldiers sent into war zones deserve to be protected from enemy fire.”

“3. Every soldier is someone’s son or daughter. Every single one,” she concludes, linking to a post she wrote on July 7.

The post received plenty of backlash on social media from pro-Palestinian supporters who accused her of being “complicit” in Israel’s occupation of Gaza.

“They’re getting free ammo shipments to kill children the age of yours from the USA, they don’t need your money too…,” wrote @e_bo30.

“Disgusted by @missmayim donating money to #IDF for b/proof vests & trying to justify it,” wrote @KreepyCrawly.

Others were upset Ms. Bialik didn’t provide information on how others could help support the IDF.

But many were supportive of the actress, calling her courageous for taking a stand on such a divisive topic.