Family receives official notification of death from IDF; special board decided to declare the tragedy based on medical, halachic considerations and evidence that he died in battle in 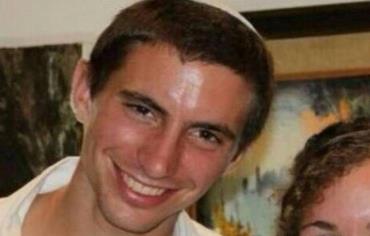 The IDF spokesman announced early on Sunday morning that at 11:25 p.m. on Saturday, the Chief Rabbi of the IDF, Brigadier Gen. Rafi Peretz, declared the death of IDF officer Lt. Hadar Goldin, who fell in battle in the Gaza Strip on Friday.

The decision was made according to the findings of a special board, headed by the rabbi, who consideration medical, halachic and other relevant considerations.

The message was delivered to the family by the Head of Personnel, Major General Orna Barbibay and Peretz.

Earlier Saturday, Sec.-Lt. Hadar Goldin’s family saw the news that the IDF was beginning to withdraw from Gaza without Hadar, who they discovered was reportedly captured by Hamas just before Shabbat began.

For Hadar’s father, Simcha Goldin, the news sounded like a rumor, fantasy, something unthinkable that could not come to pass.

“I served in the reserves until I was 50 and was a battalion commander, and it’s unthinkable to me that the IDF would abandon one of its fighters. My commander in the Northern Command was [Chief of Staff] Benny Gantz and there is no way that he would give the IDF the order to withdraw from any place when a soldier is still there,” Simcha said Saturday night.

Hadar, an officer in Palsar Givati, an elite reconnaissance unit of the infantry brigade, got engaged a few months ago to his girlfriend, Edna. His family said he made the decision to get engaged shortly after the kidnapping of the three teens in Gush Etzion, and that they were working on some of the preparations for his wedding when they received the news he was missing in action and feared kidnapped.

His brother Chemi, an IDF officer, just like the rest of the men in his family, addressed the foreign press in English, and in a British accent said “his [Hadar] voice cannot be heard. My brother is a beautiful child, he is a beautiful painter and artist and he just proposed a few months ago and is due to be married soon.”

In comments that he addressed to the international community, Chemi said, “We’ve heard nothing about him. No one is checking if he’s had any sort of medical help.

Does he get any rights, is he injured, does anyone care?” The family said that as of now it knows absolutely nothing about his fate, and it hasn’t heard any updates about his condition from the army or the government. Nonetheless, the Goldins expressed complete faith that Hadar is alive, that the people of Israel will make sure he is returned in one piece, and that he will still make it to his wedding.

“He was sent alive by the country to Gaza and was taken by a terrorist organization. We feel he is alive, we feel it,” his sister Ayelet said on the sidewalk outside the family home in Kfar Saba, and minutes later the family returned upstairs to its home, for the second sleepless night without Hadar.

← Netanyahu: Hamas Will ‘Bear the Consequences’ for Abduction
SHOCKING AUDIO: Bill Clinton On Sept. 10, 2001: ‘I Could Have Killed’ Bin Laden →