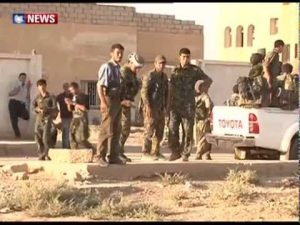 Some members of an Iraqi minority community on the run from ISIS militias have reportedly escaped the mountains where they had been stranded, but thousands more may still be in danger.

Several thousand Yazidis were reported on Saturday to have reached safety in Kurdish-controlled areas of Iraq and Syria. Yazidis — who follow an ancient religious tradition linked to Zoroastrianism — are regarded as heretics by the extremist Islamic State group that has seized territory across Iraq and Syria. The Yazidis fled the militants’ advance earlier this week, but thousands found themselves trapped in the Sinjar Mountains  in Northwestern Iraq, where many died of dehydration rather than risk being slaughtered by ISIS gunmen below.

Kurdish officials told the Associated Press that Syrian Kurdish fighters opened a safe passage from the mountains Thursday night, allowing some 20,000 Yazidis to make their way toward refuge in Syria.

Yet it is not clear how many Yazidis remain stranded amid the continued fighting. The population who fled the Islamic State offensive this week has been estimated at between tens of thousands to 100,000 people.

Brendan McDonald, a UN humanitarian officer in Iraq, told the WorldPost on Saturday that the United Nations has still not been able to access the mountains because of the continued fighting.

If Iraqi and Kurdish forces are able to open a safe passage, humanitarian agencies are ready to provide aid to the displaced families, he said.

Osamah Mohammed, a Kurdish journalist in Iraq, wrote on Twitter that Yazidi families remained on the run on Saturday as the Islamic State militants advance.

The Sinjar mountain range extends 25 miles near Iraq’s border with Syria, and is close to the Kurdish city of Dohuk, where thousands of Yazidis have also sought refuge during the Islamic State assault.