The conflict in Gaza has led to a war of words between Egyptian TV news anchors and their counterpart at the Qatari-owned Al Jazeera.

One unexpected consequence of the Gaza conflict has been the heightened tensions between Arab media outlets, with anchors from the Qatari-owned Al Jazeera anchors going head to head with their counterparts in Egypt over support for Hamas – and even Israel.

Recently, one Egyptian anchor went so far as to brand Hamas as terrorists and Israelis as brave.

The first to demonstrate support for Israel was Tawfiq Okasha, a popular Egyptian television presenter and staunch opponent of the Muslim Brotherhood. Okasha was also a firm supporter of the previous Egyptian regime, and with the fall of former Muslim Brotherhood president Mohamed Morsi, relentlessly attacked Hamas and the Brotherhood on live television.

Okasha regularly condemns Hamas leaders such as Khaled Mashaal and Ismail Haniyeh. But he reached his peak when he called the Israeli people and leaders brave, and praised them after “they took revenge and killed hundreds following the death of the three kidnapped teens.”

These and other comments earned Okasha a rebuke from Al Jazeera’s Lebanese anchor Ghada Owais, who has frequently attacked the Egyptian regime and its new president Abdel Fattah al-Sisi

Several days ago, Owais slammed the Egyptian television channels, calling their conduct “pitiful, disgusting and ridiculous.” She called the Egyptian media’s style of reporting – and their wardrobes – as obsolete. 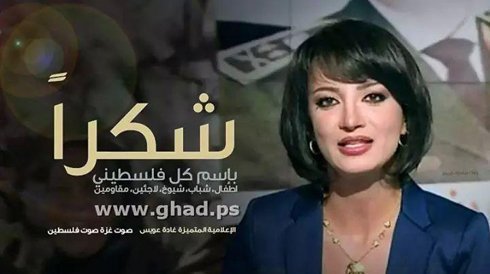 These insults led Hayat al-Dardiri, a presenter for Egypt’s Faraeen cable channel alongside Okasha, to hit back at Owais. “Whoever doesn’t like what Okasha has to say on Gaza and Hamas can go bang their heads against a wall,” she said.

Faraeen reporters were given free rein during the Gaza operation. What followed was almost unimaginable: presenters delivered fierce tongue-lashings against Hamas and made calls of support for Israel. The Egyptian state television also came down hard on Hamas, albeit in a more subtle manner.
‘Hamas are terrorists’ 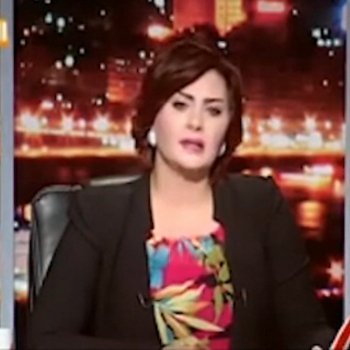 “We will never forget the day Hamas desecrated the honor of Egypt and violated the Egyptian sovereignty with its militias, who took part in breaking into prisons and killing protestors at Tahrir Square,” she said.

She also praised Israel for its immediate acceptance of the Egyptian ceasefire initiative and rapped Hamas, whom she called terrorists. “Some people can’t live without blood and victims,” she said.

According to al-Dardiri, Hamas was responsible for the destruction inflicted on Gaza and its residents. “All the commentators and experts condemned Hamas’ refusal to cease fire, and stressed that the refusal could lead to an escalation on the Israeli side and greater damage in Gaza – and that is precisely what happened.”

Hamas, she said, was solely culpable for the devastation in Gaza.

“Hamas carried out the destruction. The responsibility for the shelling of Gaza and its destruction resides solely with Hamas. Egypt has fulfilled its role and proposed an initiative. Hamas refused, and now they must clear up their own mess,” she said, strongly voicing her objections.

The views expressed by both al-Dardiri and Okasha did not emanate in a vacuum, but rather are shared by Egypt’s leaders. During the IDF operation in Gaza, senior government officials in Cairo said that “much blood would have been spared” had Hamas accepted the first Egyptian ceasefire initiative.