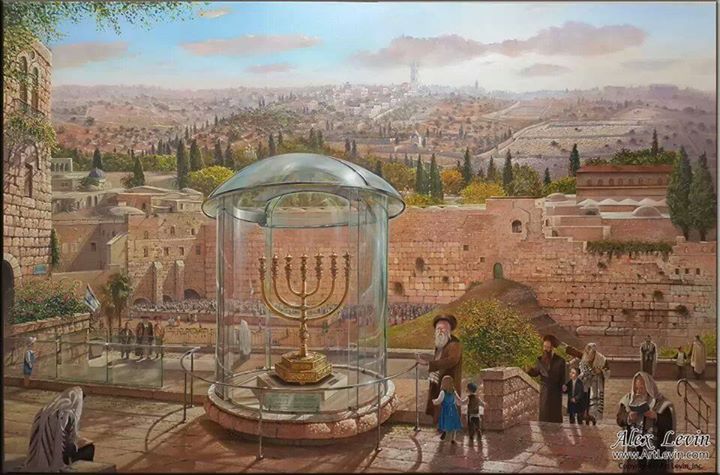 The painting ‘Light to the Nations’ is one of the most recent works by the Israeli artist Alex Levin.

It is the sign of his art coming of new age. This time we are talking a rare genre – picturing prophecy. Few years back this kind of subject was unthinkable of until a Jewish patron of art from Kiev made a really kinglike present to Jerusalem – Golden Menorah. The foreshortening of Menorah’s image in the Alex Levin’s painting is quite concrete – it is placed in the background of that particular part of the Temple Mount where the First and Second Temples used to be located and according to the Jewish sages, the Third, Eternal and indestructible Temple is about to appear.

The Golden Menorah in a see-through but very solid envelope reminds of a spacecraft ready to launch. In terms of outer space, it is destined to overcome a very short distance – the Temple Mount is so near! But the launch time is not set up yet despite the fact that the question of when is up to us only. The artist and a generous patron of art with a Jewish soul bring this time nearer with their gift from God and material values. Next to Menorah one can see orthodox Jews of all ages – a lot depends on them too. They and their predecessors have kept their faith to the Holy City through the years and now they are here again, for the traditional morning ceremony at the Menorah near the Western Wall at the Temple Mount. An old man shows a child exactly where there was and Will Be the New Temple and it is not important for the artist as to what is located there at this moment.On the Alex Levin’s painting the rising sun’s beams have not driven away the dawn’s semidarkness yet but the morning prayer time (Shaharit) has already come. A little later the prayer will take place not near the Temple Mount but on it – along the rules, not far from Menorah which will definitely take it’s place. This is what not the Jews only need. The name of the painting – Light to the Nations – is borrowed from Tanakh, the Book of Isaiah. This prophet’s words about everybody’s peace and prosperity upon Meshiah coming (Let Us Beat Swords into Plowshares) are stamped on the memorial at the entrance to the UN building in New York. But for this prophecy to come true, the light of the Golden Menorah should shine in the Third Temple in Jerusalem!