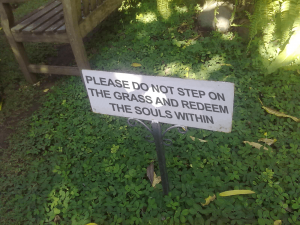 During the first days of Sukkos I spent time with family in the Catskills. On Erev Shabbos I davened in a Chassidishe shtiebel (there were few other options) where they decided, for the first time since the summer began, to do Kabbalas Shabbos outside in the field just like what the AriZ”L used to do. I remembered once reading about how the Ari and how on Kabbalas Shabbos he redeemed the souls inside the grass, trees and waves. Intrigued, I also figured that “when in Rome do as the Greeks” and went out as well.

At Boi B’Shalom the Chassidim started to dance outside on the grass. In no time flat the grass became flattened. It was then that I realized how the Ari “redeemed the souls” of the grass and water. All they needed to do was dance outside at a beachfront, and while dancing on the grass and sand with waves coming out at them thinking about how the associated souls there were being redeemed. In a way it makes sense as plants are in fact living creatures.

This is a very Chasidic concept, where whatever action one does can either be holy or mundane, depending on ones thoughts. Depending on the thought of the observer, this can either be perceived as beautiful or nonsense. Sometimes it’s cool to take a theoretical concept and put it to practical use.

On a related note, I remember having a Chassidic roommate who, every Shabbos would take a hard-boiled egg and make egg-salad with his fork. He would first section the egg into four components, meditating on the YKVK (Hashem’s four-letter name, roughly referring to past, present and future).