PM failed to offer concrete proposals how to curb nuclear threat, but hinted he would back agreement Israel ‘may not like, but could live with’ 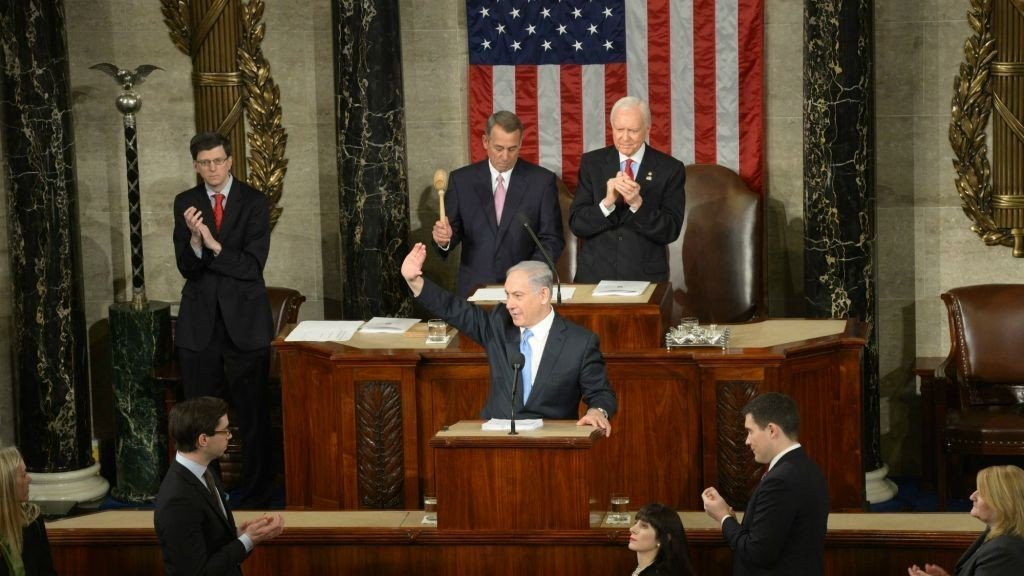 The speech had everything you’d expect: A solid case against letting Israel’s “genocidal enemies” anywhere near nuclear weapons, a cut and dried rejection of Western rapprochement with Iran, tributes to the unbreakable bond between Israel and the United States, Purim references, Elie Wiesel, the Holocaust, and even Moses. But major surprises there were few.

In his controversial address to a joint meeting of Congress Tuesday, Prime Minister Benjamin Netanyahu did not reveal any hitherto unknown details from the nuclear negotiations with Iran, as some had feared. He also did not present the world with a concrete and pragmatic policy proposal outlining how the Islamic Republic’s march toward nuclearization could be stopped, as some had hoped.
US President Barack Obama said “there was nothing new” in the speech. True, that Netanyahu would vehemently oppose the currently discussed deal was as clear as his Iran-North Korea comparison. It is noteworthy, nevertheless, that Netanyahu did not repeat his much-stated position that Iran may not retain any uranium enrichment, a maximalist demand US National Security Advisor Susan Rice Monday called “neither realistic nor achievable.”

Rather, Netanyahu seemed somewhat pragmatic when he hinted that Israel was willing to consider even an imperfect deal, as long as it’s not as imperfect as the one currently on the table.

Netanyahu’s speech was masterly, less because of the abundant rhetorical shtick (such as the awkward line saying the Iran deal would be “a farewell to arms control”) but because he delivered a concise point-by-point argumentation of why the prospective agreement is so bad for Israel and world peace.

Despite the friendly and ostensibly moderate face that the Iranian government puts on for the world, Netanyahu said, at its core, it is still the same murderous, freedom-hating regime that wants to wipe Israel and American off the map.

“Last year, [Iranian Foreign Minister Javad] Zarif who charms Western diplomats laid a wreath at the grave of [slain Hezbollah commander] Imad Mughniyeh,” Netanyahu said, in a thinly veiled attack against US Secretary of State John Kerry, who at the time of speech was meeting with said Zarif trying to finalize the deal. “Imad Mughniyeh is the terrorist mastermind who spilled more American blood than any other terrorist besides Osama bin Laden. I’d like to see someone ask him a question about that.”

The first major concession of the prospective deal is that it leaves Iran with thousands of centrifuges, Netanyahu lamented. That would allow the regime to attempt a breakout toward the bomb in a very short time, and even the toughest inspection regime would be powerless to do anything about it, he argued.

“True, certain restrictions would be imposed on Iran’s nuclear program and Iran’s adherence to those restrictions would be supervised by international inspectors. But here’s the problem. You see, inspectors document violations; they don’t stop them.” Iran, he added, not only defies inspectors, “it also plays a pretty good game of hide-and-cheat with them.”

Citing leaked details about the deal, Netanyahu then railed against the so-called sunset clause of the developing agreement, which stipulates that after a decade the deal expires, “Iran would then be free to build a huge nuclear capacity that could product many, many nuclear bombs,” the prime minister warned. This concession, he noted, was even worse than leaving Iran with uranium enrichment capability.

In another swipe at Kerry, Netanyahu quoted the secretary of state as saying that Iran could “legitimately possess” massive centrifuge capacity after the agreement ends. “Now I want you to think about that,” Netanyahu said. “The foremost sponsor of global terrorism could be weeks away from having enough enriched uranium for an entire arsenal of nuclear weapons and this with full international legitimacy.”

Netanyahu’s bottom line: this deal doesn’t prevent Iran from getting the bomb, it practically hands Iran the bomb on a silver plate.

But the prime minister didn’t suffice with attacking the contours of the prospective deal. He went on to assail the very idea that Iran could be welcomed back into the family of nations — a notion that guides the current administration’s various Middle East policies. 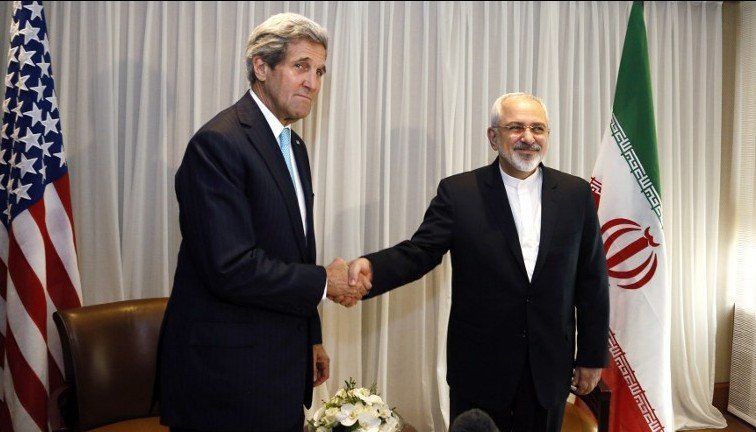 The ayatollahs have been ruling in Tehran for over a generation and there is no reason to hope for regime change, Netanyahu posited. Worse, this deal would only increase its “voracious appetite for aggression.”

Iran needs to fulfill three conditions before the international community can lift any sanctions, Netanyahu demanded: Halt its aggression against Sunni states in the Middle East, cease supporting terrorism around the world, and stop threatening to annihilate Israel.

Despite having warned of the regime’s fanatical nature and lack of trustworthiness, in this segment he appeared to signal that if the world already wants to sign a deal, it should at least try to get as much out of it as possible.

The alternative to the current deal is not war, Netanyahu asserted, but a superior agreement that could be obtained if only the West applied more pressure on Iran. “A better deal that doesn’t leave Iran with a vast nuclear infrastructure and such a short breakout time.” In other words, a deal in which Iran can keep not a “vast” but a perhaps a medium- or small-sized nuclear infrastructure, would be a different story. Not a short but a somewhat longer breakout wouldn’t be great, but it might be something we can talk about, he appeared to intimate.

To be sure: Netanyahu opposed the interim deal with Iran and will vehemently reject any agreement he deems dangerous to Israel — and as can be seen from his position regarding security arrangements in a possible peace deal with the Palestinians, he will be very difficult to satisfy. And yet, in his speech, Netanyahu said he hoped for a “better deal that Israel and its neighbors may not like, but with which we could live.” Such a deal might very well be impossible, but Netanyahu appears to indicate that he is willing to consider a deal that is less bad, and that he realized his zero enrichment demand is indeed, as Susan Rice said, an “unachievable ideal.”

Whether making all these points — the unambiguous rejection of the current deal and the subtle indication that a still imperfect but better deal might be acceptable — was worth risking Jerusalem’s relations with Washington is a matter of partisan dispute.

The way with which American and Israeli politicos reacted to the speech hence also didn’t shock anyone. As Israeli political communications experts Gadi Wolfsfeld predicted last week, the speech was a classic example of a Rorscharch test. Those sympathetic to the prime minister felt he convincingly made the case against the prospective nuclear agreement and masterfully deconstructed the American administration’s talking points on why the offer currently on the table would be a good deal.

Deputy Foreign Minister Tzachi Hanegbi after the speech indicated that it might have actually moved Congress into actively opposing the prospective nuclear deal with Iran, and Republican lawmakers, in their initial reactions, demanded that “Congress must assert its role and responsibility as a co-equal branch in the safety of America and Israel,” as Doug Lamborn of Colorado put it.

Those on the other side of the argument agreed with Obama that the much-hyped speech offered little new, indicating that the fuss was for nothing. For a nice but eventually ineffective speech, Netanyahu caused untold damage to Israel’s strategically important partnership with the US, they opined.

“I was near tears throughout the prime minister’s speech — saddened by the insult to the intelligence of the United States” and its negotiating partners, “and saddened by the condescension toward our knowledge of the threat posed by Iran and our broader commitment to preventing nuclear proliferation,” Democratic Leader Nancy Pelosi said.

Isaac Herzog, Netanyahu’s rival for the premiership, said regardless of how eloquent the speech was, it failed to thwart Tehran’s nuclear ambitions, or even to slow them down one bit, to which Netanyahu’s Likud party responded that the left puts cheap political shots over national security.

Now that Netanyahu’s historic speech is history, it’s back to politics as usual.