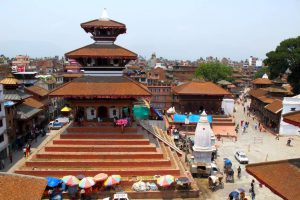 With the recent Nepal earthquake tragedy, Charedi Rabbis have pulled no punches in terms of trying to pinpoint exactly which sin to blame it on. They quoted every source in the book.

In my humble opinion, they essentially became prophets at an age when prophecy has been handed over to fools and children – take your pick. Like my comments on Hurricane Sandy a couple of years back, I feel that only the Creator has His reasons for it. Only the one that created the storm and people that died can really Judge. For the rest of us, we should only look at ourselves individually and see how we can better our own selves – no two people are alike or on the same level for that matter. For one to pinpoint blame on one particular sin that that person isn’t guilty of implies that that person himself is perfect, and nobody is perfect except Gd. Not only that but this might perhaps fall under commandment #2 of placing gods in front of Gd, since they might be putting themselves as gods in front of Gd R”L.

I also find it interesting that during the time of Sefiras HaOmer where we are to all better ourselves by trying to love one another better, we focus on blaming everyone else and instilling hate.

It wasn’t so long ago that the “real Rabbis” from 100+ years ago used to say that we each need to fix our ways. The real Chassidishe Rebbes did one further: each one blamed himself in public for sins he never did himself, but that the public did in his face. To a degree they were right: any time someone sins and we don’t admonish him/her, let alone prevent, it’s as if we were partners in that sin. They took that literally. We don’t have that kind of leadership anymore. Just my 2c.

All the above stated, here are my top 5 most popular reasons why the Nepal Earthquake occurred.

This one was from R’ Yossi Mizrachi. While I don’t condone idol worship, what I would have said instead was that we should all get rid of our personal idolatries as those will kill us as well. Things such as being way too nervous at job interviews (this used to be one of mine), prioritizing other things in life over serving Hashem, etc. I sort of “get” this one, as hard as it is to swallow. 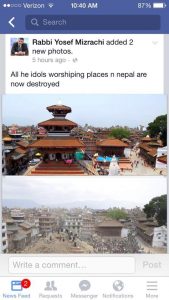 This is one thanks to R’ Moshe Sternbuch. I personally fail to see the midda-kenegged-midda on this one.

“We must protest day and night when myriads are converted in the army and out of the army by government-employed rabbis,” he told devotees.

“By law they are completely gentile,” Sternbuch said. “And afterwards the daughters of Israel marry those gentiles, against the strict prohibition on forbidden relationships.”

This is another one thanks to R’ Moshe Sternbuch.

“According to our study, the earthquake should be seen as a sort of warning from Heaven to act to prevent the blasphemy caused by the proliferation of these transgressions. And indeed, God’s mercy spared us from the punishment [that should have been] on us, but in order not to forget the notion that there is a terrible punishment of earthquake for the iniquity of [what goes on in] this land [of Israel, God] sent us a warning from a distance to [cause us to] remember this penalty [for our sins] exists,” Sternbuch said.

2. You Only Know if You’re Worthy Enough

This was the opinion given by R’ Shteinman:

When asked just what does HKBH want from us, the gadol hador is quoted saying “One who wishes to know understands exactly what HKBH wants from us but one who does not really want to know will not understand…”

Okay, this is one I made up, in an attempt to inject some humor into an otherwise sad event.

← How Kosher is the Kosher Switch?
Some Awesome Lag B’Omer Pics On the Internet →