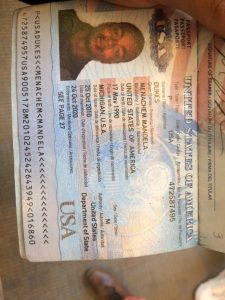 A couple from Brooklyn arrived to Michigan for a wedding. They were pulled over by a Puerto Rican police officer for a minor traffic violation. The woman politely explained to the officer that they’re not so familiar with the local traffic laws, as they are from Brooklyn N.Y. The officer became excited. He asked if they’re Lubavitch. After answering in the affirmative, the officer told them a story.

His father was a taxi driver in Brooklyn for many years. Once 2 people were getting a ride to Lubavitch Rebbe. The taxi driver asked if they can get a blessing for him too, as he didn’t have kids for many years. They told him why not, but park the taxi and come in with us. He got a dollar and blessing, and sure enough a short while later his wife got pregnant. As a gratitude, they named the son Menachem Mendel after the Rebbe. That is him, the police officer.

As proof to the story, he always carries along his passport. The couple asked if they can take a picture, otherwise nobody will believe them. To which he agreed. 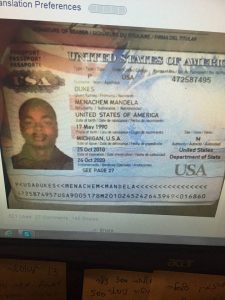 Shout-out to Mendel Mish for sharing this story: https://www.facebook.com/mendelmish