Megillas Esther is an iconic book read on Purim to show how close the Jews were to certain annihilation, but that in the end we were saved and have much to be thankful for. What many don’t realize is that before the Mordechai HaTzaddik version was standardized, Megillas Esther was translated into all languages, and if one read any version, it was a kosher reading (today is a different story since if it were still the case a bunch of different religions would come out).

One version that has survived today is the Greek translation (two different versions). I was first exposed to this by Dr. Aaron Koller’s post “A More Religious Version os Esther?” which covered it nicely. The PDF of the translation is here: 17-esther-nets. 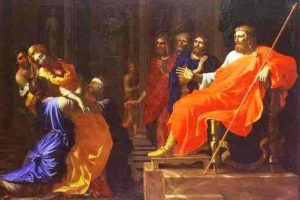 This is in line as a king is usually the attribute of Justice (מדת הדין) until he sees that the people cannot withstand/survive it, then injects mercy (רחמים).

2. The Concept of Dragons Existed Back Then

If Mordechai (מרדכי) dreamt of himself and Haman as dragons, that meant it was present in popular culture 2,500 years ago.

3. Mordechai (מרדכי) Didn’t Just Go Out with Sackcloth, He Cried to Hashem

This makes sense because just going out wearing sackcloth doesn’t accomplish anything.

4. Hashem is Behind EVERY LITTLE THING

The Greek version mentions that Hashem caused Achashverosh to lose slumber. That shows how even there Hashem was behind that and that the Jews of Greece wouldn’t infer that otherwise.

This also indicates that the concept of intelligent design came more than 2,000 years before the term was coined in the 19th century.

5. Esther Did in Fact Sleep with the King

And hated every moment of it since he was not Jewish and uncircumcised.

If she detested sleeping with the king she certainly went to great lengths to keep kosher by eating seeds and vegetables. Hence the mohn taschen/hamantaschen (poppyseed pockets) tradition.