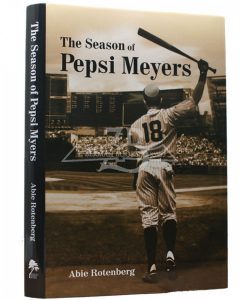 I’ve seen “The Season of Pepsi Meyers” on Judaica store bookshelves for over a year now and, though I’m a baseball fan of both the Yankees and Blue Jays, had reservations about purchasing it. I’ve come across cheesy, poorly plotted novels and was turned off by the price tag of Jewish books in Canada. I recently splurged and read the book, ending up pleasantly surprised. Here are some thoughts.

Firstly, the game specifics: I was impressed with the level of detail Abie put in regarding drafts, contracts, baseball rules, and game details. What I was disappointed the most was on basic historical flaws and misses. The most notable is that in the book it states that Hank Greenberg was the Tigers great of the 1950’s even though he was a star in the 30s and 40s. He was only elected to the Baseball Hall of Fame in 1956. Another was a quote attributed to Yogi Berra but really was Dizzy Dean that said ““It ain’t bragging if you can do it” (thanks http://njjewishnews.com/kaplanskorner/2015/12/18/korner-review-the-season-of-pepsi-meyers/).

Next, regarding the unbelievable pursuits and characteristics of Pepsi, I learned that each item has had a precedent. Here are some:

My biggest problem with the book was the ending, in that it came across as too “forced.” Here are my main problems:

For me, I personally would give this a 3/5. However, I know that this book will delight younger fans (whom this book is intended for) and for them it would be a 5/5. Therefore I’m giving this a 4/5. It’s worth the read.