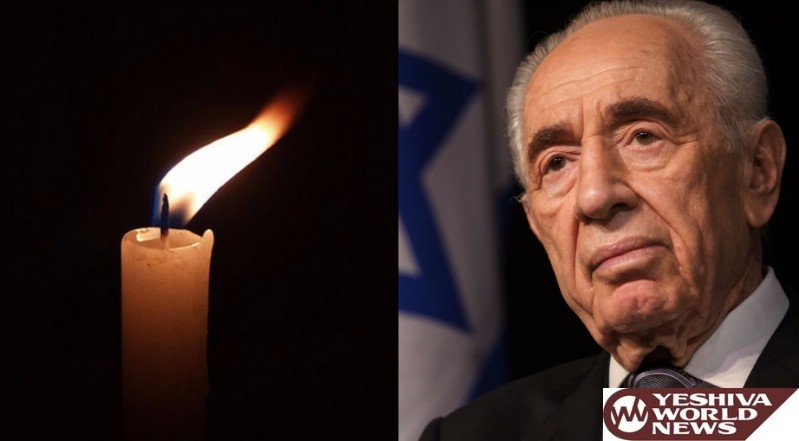 Former Israeli President Shimon Peres was Niftar moments ago. He was 93.

Peres had been hospitalized since suffering a stroke two weeks ago.

Peres held virtually every senior political office in Israel over a seven-decade career, including three terms as prime minister as well as stints as foreign minister and finance minister.

He was the ninth President of Israel from 2007 to 2014. Peres served twice as the Prime Minister of Israel and twice as Interim Prime Minister, and he was a member of 12 cabinets in a political career spanning over 66 years. Peres was elected to the Knesset in November 1959 and, except for a three-month-long hiatus in early 2006, served continuously until 2007, when he became President.

Shimon Peres was born Szymon Perski, on 2 August 1923, in Wiszniew, Poland (now Vishnyeva, Belarus), to Yitzhak (1896–1962) and Sara (1905–1969 née Meltzer) Perski. The family spoke Hebrew, Yiddish and Russian at home, and Peres learned Polish at school. His father was a wealthy timber merchant, later branching out into other commodities; his mother was a librarian. Peres has a younger brother, Gershon.

Peres once told the Lubavitcher Rebbe that he had been born as a result of a blessing his parents had received from a chassidic rebbe and that he was proud of it.

Peres’ grandfather, Rabbi Zvi Meltzer, a grandson of Reb Chaim Volozhin, had a great impact on his life. In an interview, Peres said: “As a child, I grew up in my grandfather’s home. … I was educated by him. … My grandfather taught me Talmud. It was not as easy as it sounds. My home was not an observant one. My parents were not Orthodox but I was Haredi. At one point, I heard my parents listening to the radio on the Sabbath and I smashed it.”

At the age of four, Peres was taken by his father to Radin to receive a blessing from the Chofetz Chaim.

In 1932, Peres’ father immigrated to Palestine and settled in Tel Aviv. The family followed him in 1934. Peres was one of the founders of Kibbutz Alumot. In 1941 he was elected Secretary of Hanoar Haoved Vehalomed, a Labor Zionist youth movement, and in 1944 returned to Alumot, where he worked as a dairy farmer, shepherd, and kibbutz secretary.

At age 20, he was elected to the “Working and Learning Youth” national secretariat, where he was only one of two Mapai party supporters, out of the 12 members. Three years later, he took over the movement and won a majority. The head of Mapai, David Ben-Gurion, and Berl Katznelson began to take an interest in him, and appointed him to Mapai’s secretariat.

In 1944, Peres led an illicit expedition into the Negev, then a closed military zone requiring a permit to enter. The expedition, consisting of a group of teenagers, along with a Palmach scout, a zoologist, and an archaeologist, had been funded by Ben-Gurion and planned by Palmach head Yitzhak Sadeh, as part of a plan for future Jewish settlement of the area so as to include it in the Jewish state. The group was arrested by a Bedouin camel patrol led by a British officer, taken to Beersheba (then a small Arab town) and incarcerated in the local jail. All of the participants were sentenced to two weeks in prison, and as the leader, Peres was also heavily fined.

All of Peres’ relatives who remained in Wiszniew in 1941 were murdered during the Holocaust, many of them (including Rabbi Meltzer) burned alive in the town’s Shul.

In 1945, Peres married Sonya Gelman, who preferred to remain outside the public eye. They had three children. Sonya Peres was unable to attend Shimon’s 2007 presidential inauguration ceremony due to ill health. She died on 20 January 2011, aged 87.

He won the 1994 Nobel Peace Prize for his work in reaching an interim peace agreement with the Palestinians. As president, a largely ceremonial office, he cultivated an image as the country’s elder statesman and became a popular fixture at international conferences like the World Economic Forum in Davos.

Peres remained active since completing his seven-year term as president in 2014, and is one of the country’s most popular public figures. He often hosted public events at his peace center, bringing together Arabs and Jews in efforts to promote peace and coexistence.

← Review: The Season of Pepsi Meyers by Abie Rotenberg
WHAT WAS THE MANNA? →