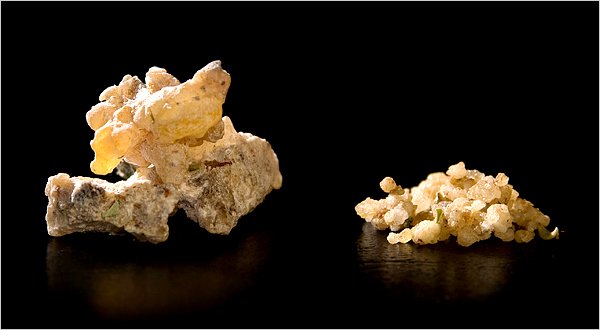 Huge hat-tip to finkorswim.com to provide a very rational account of the Manna and how it tasted.

I have been wondering about this for a while. Follow me on this journey from a 3000 year old story to current culinary trends….

As the Israelites sojourned in the desert for 40 years, the Torah tells us that they ate Manna. It was a food that they were not familiar with as they reacted to the manna by saying “man hu?” what is it?

Reading the  text of the narrative in the Torah tells us some very interesting details. Here are some snippets:

The layer of dew had risen, and behold, on the surface of the desert were thin flakes. It was as fine as frost on the ground.

The Sons of Israel saw it and said to one another, “What is it?,” for they did not know what it was. Moshe said to them, “This is the bread that God is giving you to eat.

They gathered it each morning, each man according to what he would eat. When the sun became hot, it melted.

The House of Israel named it manna. It was like white coriander seed, and it tasted like wafers in honey.

This is how most Orthodox Jews approach the Manna.

Then I saw the Ibn Ezra. He says that Chivi has seen this substance called manna. The Ibn Ezra asks several piercing questions on this version of manna. But he does not say that it is impossible to say that the manna was a natural substance. This would seem to indicate that it is possible that Manna is a naturally occurring, not miraculous substance. Its existence in the desert on a daily basis may have been miraculous. But the food is a natural food.

I wondered about this Ibn Ezra for a while. Does this food really exist? Does it really fall from the sky as the text says? What does it taste like?

Then I saw the NY Times article on Manna. (HT: VIN / Rationalist Judaism).

Here are the money quotes:

But as miraculous as its biblical apparition may seem, manna is real and some chefs have been cooking with it.

The dozens of varieties of what are called mannas have two things in common. They are sweet and, as in the Bible, they appear as if delivered by providence, without cultivation.

Most of this manna is either dried plant sap extruded from tiny holes chewed out by almost invisible bugs, or a honeydew excreted by bugs that eat the sap.

Rarer are the mannas not from sap, including Trehala manna, the sweet-tasting cocoon of the Larinus maculates beetle from Turkey; and manna-lichen (Lecanora esculenta), which occasionally dries up and blows around to form semisweet clouds out of which manna settles into drifts from western Greece to the central Asian steppe.

Mannas form best in extremely dry climates — like the Middle East’s — where sap oozes at night and dries up in the morning. The favored theory on what the Israelites called manna is the sap of a tamarisk tree.

Paul Liebrandt of Corton in Manhattan used Shir-Khesht manna in a dish of charred Frog Hollow Farm apricots, fresh wasabi and Kindai kampachi. “The texture is unlike any other I’ve experienced — chewy and crunchy at the same time,” Mr. Liebrandt said. “It also makes the food intensely personal, because no two people taste manna the same way. I might taste a haunting minty-ness, while you might detect a whiff of lemon. No other ingredient is like that.”

Even more complex and subtle is the Shir-Khesht manna from the cotoneaster nummilaria shrub. Shir-khesht looks like broken-up bits of concrete or coral and is whiter than hedysarum manna. It is sweet, with some gumminess that eventually dissolves in the mouth. Shir-khesht’s tongue-cooling effect comes from mannitol, a sugar alcohol in this and many other mannas; the sensation is similar to menthol, without the menthol taste. It has notes of honey and herb, and a faint bit of citrus peel.

I find this incredibly fascinating.

If we put it all together we get this: Manna is a real food. It is normal to react to its discovery by saying it resembles no other food. It is made up of tiny particles that form a sweet crunchy substance. It appears to fall from the heaven as it needs no cultivation and is light enough to be transported by the wind. The Sinai Desert is a likely place for manna to “fall”. The taste of the manna is so unique that no two people taste it in the exact same way. The miracle of the manna was more likely its consistent presence than its existence at all.