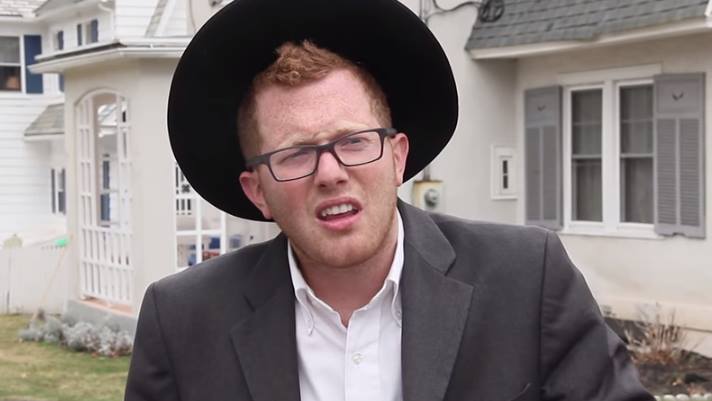 Yeshivish for “I disagree:” “I hear.”

“Where are you holding?” = “What gemara are you currently learning”

“I hear” is universal for “you don’t know what you are talking about, but my time is not worth arguing with you”

“It’s brought down” is the scholarly equivalent of starting a story with “I know a guy who knows a guy…,” , as in “my rebbe brought down this opinion”

“Excuse me, sir, I see you ate a few seats down from us. Would you mind joining our zimun?” in yeshivish is “Will you be mitztaref?”

Have who/what to rely on.

‘Closing’ the lights = turning them off

A traveling Rabbi once gave a shmooze at my Yeshiva where he started by saying, “There’s a word I hear a lot today that I really dislike. I dislike it so much I won’t even say it, I’ll only spell it. F-U-,” at this point all the bochurim were tittering and the manahel’s eyes starting bugging out, “-N. Fun. What is this fun?” etc. Big lolz.

Falls out on = falls on, As in: “When Yom Kippur falls out on Shabbos, the kiddush really sucks.”

{do a thumb flip} = When you’re making a point

“mmm mmm hhmmm ahuh” = thank you for calling, but I can’t talk right now because i’m in the middle of morning prayers even though it’s 11 in the morning because I had to do carpool.

Yeshivish for pretty much any preposition (with, at, chez, according to, etc.) = by, as in “I’m staying BY his house. Should be AT or IN.”

“Out of town” = the entire planet outside of Brooklyn

As in: I took a date to Top of the Sixes on 5th Avenue in New York, many years ago. We’re sitting at a table, near a window, when a toddler runs between us, all excited to look out. His parents come running behind, mortified, and Mom explains that they’re here from Florida, and the kid has never seen anything like this. She asks if we’re from around here. Before I can say anything, my date says “No, we’re from Flatbush.”

Mah nafshach = what’s with you man? As in, what are you smoking?

Limeye nafka minah = why should I care

Phrases not even worth translating

Slide me across the desk the tefillin bag.