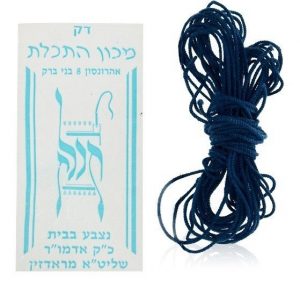 Let’s build a case, based on the videos shared in the Radzyner album and other resources, for the validity of one wearing Radzyner Techeiles. FWIW I’m aware of R’ Michael Shlomo Bar Ron’s video which I respectfully refuted for the most part: https://www.mywesternwall.net/…/analysis-radziner-vs-murex-…

Some pro-Radzyner arguments I can think of are:

1. The Gemara is pretty vague about what a Chilazon is, and for the most part, the body and behavior of the cuttlefish matches many of the simanim.

2. Kala Ilan is only an issue when someone is knowingly being deceitful. If it’s the “wrong” Techeiles, it’s treated as “only white” strings and therefore there’s no downside.

3. The Gemara wrote that the “blood” of the Chilazon was essential for making Techeiles but doesn’t spell out that it needed to be for dying purposes. Radzyn Chassidim understand that the blood was a magical ingredient for whatever reason only Chazal knew. This makes the cuttlefish ink a binding tool, but not a coloring tool. What makes this different from ox blood is that the Rebbe said this is what to use. The Englards compare it to whiskey on Pesach: if it’s made using wheat-based ingredients it’s chometz but if made with other ingredients it’s fine. Both are whiskeys. Their argument is that this is the same as well.

4. Chazal didn’t state anything against a wrong sea creature, which suggests that as long as it wasn’t plant-based it’s fine.

5. Hashem rewards those that try to do the right thing.

6. Chassidic thought relies on the Rebbe first, everything else second. If the Radzyner Rebbe chose the cuttlefish as per point 3, he made the cuttlefish holy for protein-based dye binding purposes, differentiating it from ox blood or gefilte fish.

7. The Breslovers had someone with Ruach Hakodesh based on R’ Nachman or a follower that it was predicted in the year the Radzyner Rebbe actually did it, someone would say he found Techeiles and nobody would believe him. This ruach haKodesh is important from a chassidic perspective.

8. The Radzyner Rebbe passed away only 2 years after discovering Techeiles, which is kind of unfair since he didn’t have enough time to let his findings percolate to the rest of the Jewish community.

9. R’ Hershel Schachter was critical about one of the founders of R’ Yitzchok Elchonon Spektor (REITS) not wanting to wear Radzyner Techeiles since he was fighting reform and didn’t want to be laughed at for breaking mesorah. R’ Schachter’s retort is that Hashem didn’t say to fight reform, He said to wear Techeiles!

10. Even though Radzyn Techeiles is cheaper now due to the easy accessibility of cuttlefish, nowhere does it say it was as easy back then to catch them.

11. Regarding linguistics (Halzun in Arabic, Halazon in Persian, etc.), the Radzyner Rebbe didn’t think that other languages are a raya. Many words go from being specific to general, or even totally different meanings when crossing language barriers. I.e, in Israel, “Corn Flakes” means cereal. Many different cereals. Whereas in North America, Corn Flakes are a specific brand. In Canada a bungalow is a one story house. In New York it is a cottage/Cabin outside the city. They both come from a certain root and have a similar meaning, but take on different forms in different countries and languages. (H/T: R’ Avraham Gislason)

13. The kicker: if Chazal knew about the murex techeiles and preferred the cuttlefish one, why didn’t they specifically state that any blue other than the kala ilan indigo plant isn’t allowed? Must be that no other blue was around. Radzyn’s answer is that, while the murex dye can make blue, the primary color that the Greek and Roman nobility used it for was Argaman-purple. Also they argue that since murex was so expensive that Chazal didn’t bother mentioning it. This is admittedly very weak because the Gemara does state it’s expense. Plus the fact that Techeiles was outlawed due to Roman decree is documented and is a very good reason for its loss. Answer: Just as Chilazon today means in general “snail,” the Radzyner Rebbe held that Chilazon is a general category of sea creature, as opposed to a specific single species. (H/T: R’ Avraham Gislason)