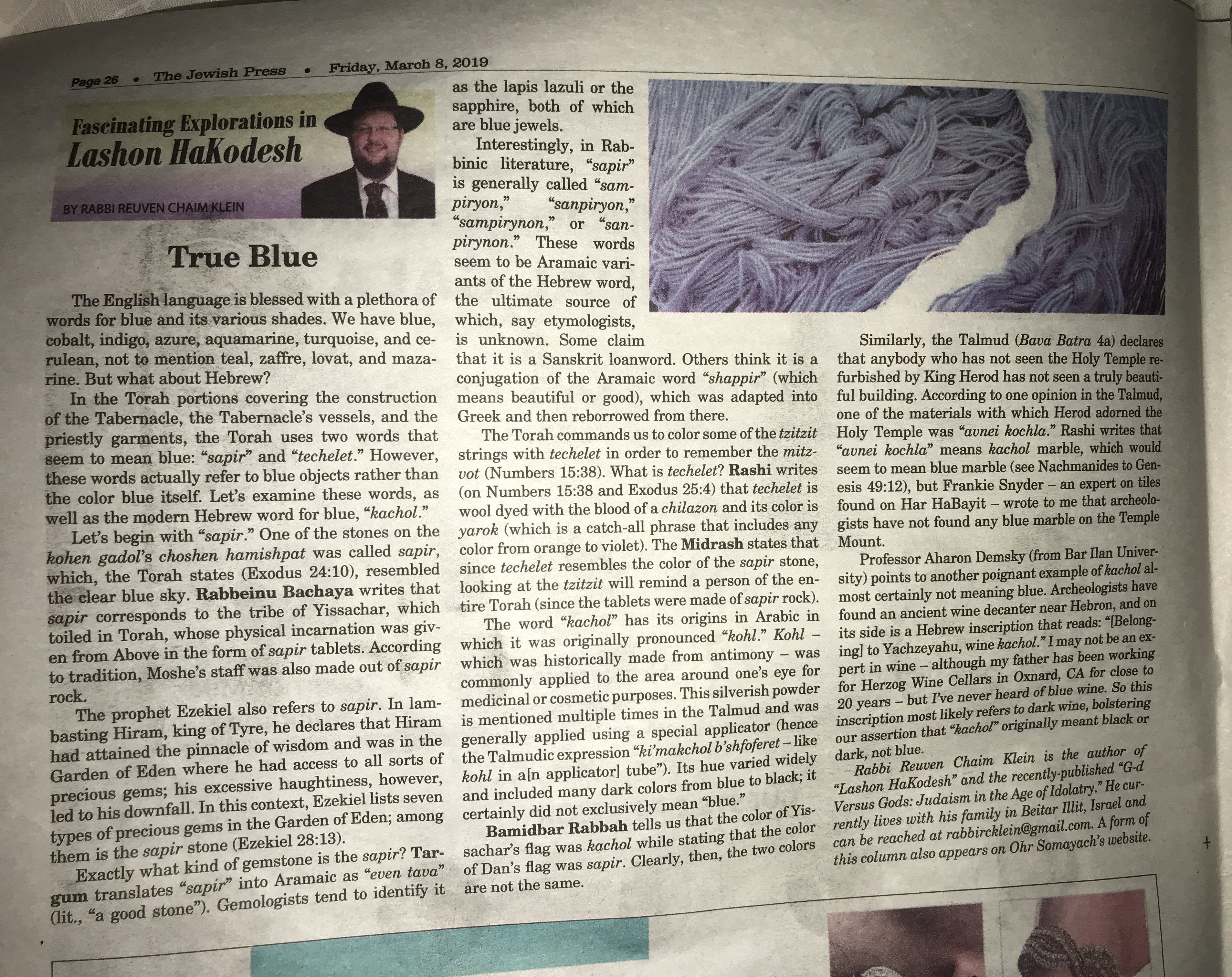 The original, unedited piece was in Google Groups “What’s in a Word?”

The English language is blessed with a plethora of words that represent the color blue and its various shades. We have blue, navy blue, cobalt, indigo, azure, and, of course, we also have aquamarine, turquoise, and cerulean, not to mention teal, zaffre, lovat, and mazarine. But what about in Hebrew? In the Torah portions which deal with the construction of the Tabernacle and its paraphernalia, there are two words which seem to refer to the color “blue”: sapir and techeilet. However, this understanding is somewhat of a misnomer, because the Torah never actually refers to the color blue in itself, but rather uses these two terms to refer to specific items which are colored blue. In that spirit, we will seek to uncover what these words actually mean in the Bible, as well as the origins of the Modern Hebrew word kachol, which has been adopted to mean “the color blue”.

We begin with sapir. The second stone of the second row of the Kohen Gadol’s Choshen HaMishpat is called sapir (Ex. 28:18, 39:11). Exodus 24:10 describes the sapir as resembling the clear-blue sky. Rabbeinu Bachaya writes that the sapir stone on the breastplate corresponds to the tribe of Yissachar because they toiled in Torah, and the physical incarnation of Torah given from Above were the Tablets of sapir. Indeed, tradition teaches that not only were the two sets of Tablets which Moshe brought down from Mount Sinai made of sapir rock, but so was Moshe’s staff.

The prophet Ezekiel also lambasts Hiram, the king of Tyre, for having attained the pinnacle of wisdom and having been in the Garden of Eden, where he had access to all sort of precious gems—but allowing his excessive haughtiness to be the bane of his downfall. In that context, Ezekiel lists seven types of precious gems that were found in the Garden of Eden, and among them, he mentions the sapir stone (Ezekiel 28:13).

So what exactly is sapir? From all the above, it is as clear as day that the word sapir refers to a blue precious gem. But exactly what gemstone is it? The prophet Ezekiel, when describing his vision of G-d’s Heavenly Chariot, mentions something that looked like a sapir stone and was in the form of a throne (Ezekiel 1:26; 10:1). Targum translates even sapir into Aramaic as even tava (“a good stone”), and nothing more. Gemologists tend to identify the sapir stone with the lapis lazuli or the sapphire—both of which are blue jewels.

Interestingly, in Rabbinic literature, the word sapir is generally displaced by a different, similar word which can be spelled in various ways: sampiryon, sanpiryon, sampirynon, or sanpirynon. These words seem to be Aramaic variants of the Hebrew word sapir. However, etymologists admit that the ultimate source of this word is obscure. Some claim that it is a Sanskrit loanword. Others prefer to think of it as simply a conjugation of the Aramaic word shappir (“beautiful” or “good”), as specifically applied to a gem, and then adapted into Greek and reborrowed from there.

The Torah commands us to color the strings of the tzitzit with techeilet in order to remember all the Mitzvot (Num. 15:38). What is techeilet? Rashi (there and Ex. 25:4) explains that the definition of techeilet is wool dyed with the blood of a chilazon and its color is yarok (which is a catch-all phrase that includes any color from orange to violet, with yellow, green, blue and indigo in between). The Midrash explains that because the color of techeilet resembles the color of the sapir stone, looking at the tzitzit will remind a person of the entire Torah (because the Tablets were made of sapir rock).

What is the chilazon? Some claim it might be the murex trunculus (a marine snail found off the coast of the Holy Land) or the sepia officinalis (the common cuttlefish)—although traditional sources assert that it is something that has been hidden from us, so we do not know exactly what it is.

The word kachol has its origins in Arabic were it was originally pronounced kohl. Kohl—which was historically made from antimony—was commonly applied to the area around one’s eye for medicinal or cosmetic purposes. This silverish powder is mentioned multiple times in the Talmud, and was generally applied using a special applicator (the Talmudic expression ki’makchol b’shfoferet literally means, “like kohl in a[n applicator] tube”). Its hue varied widely and included many dark colors from blue to black; it certaninly does not exclusively mean “blue”.

In fact, that are some instances in which the word kachol clearly means “black”, not “blue.” For example, the Midrash Bamidbar Rabbah discusses the colors of the different tribal flags and tells that the color of Yissachar’s flag was kachol, while stating that the color of Dan’s flag was sapir. Similarly, the Talmud (Bava Batra 4a) declares that anybody who has not seen the Holy Temple as refurbished by King Herod the Great, has not seen a truly beautiful building. According to one opinion in the Talmud, one of the materials with which Herod adorned the Holy Temple was avnei kochla. Rashi (there and Sukkah 51b) explains that this refers to marble that is kachol—seemingly blue marble (see also Nachmanides to Gen. 49:12). Yet, Frankie Snyder (an expert in tiles found at the Temple’s site) wrote to me that archeologists have not found any blue marble (although they have found several other colors from Herod’s Temple). This suggests that kacholdoes not really mean “blue.”

Professor Aharon Demsky (from Bar Ilan University) points to another poignant example of ancient usage of the word kachol. Archeologists found an ancient wine decanter near Hebron, and on its side was a Hebrew inscription that read: “[Belonging] to Yachzeyahu, wine kachol.” I may not be an expert in wine—though my father has been working for Herzog Wine Cellars in Oxnard, CA for close to twenty years—but I’ve never heard of blue wine. I’ve heard of blue cheese, bluegrass, and blue movies, but not blue wine. So this inscription most likely refers to dark wine—bolstering our assertion that the word kachol originally meant “black” or “dark”, not “blue”.

← A Case for Radzyner Techeiles
Techeiles – Methods to Get Blue Color →