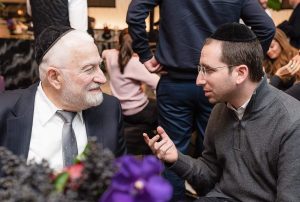 This is about Rav Schachter. Please read it. Please.

My brother Shay (of Young Israel of Woodmere) was recently a guest on the “Behind the Bima” Podcast hosted by Rabbi Efrem Goldberg of the Boca Raton Synagogue.

Most of the conversation was around what it is like to be my father’s son, particularly at a time when he has been fielding thousands of complex questions that have come up since the COVID pandemic began.

There were a few stories that my brother told in that interview that were just too good not to share; stories with deep and valuable lessons that we can all learn from.

Story #1: Over the past 3 months, hundreds of calls and emails have come in every day from Chief Rabbis around the world, Hospital CEOs, medical ethicists, infectious disease doctors, heads of COVID ICU units, community leaders, and family members of those with COVID.

While there have been pandemics in past generations, most of the questions that are coming up at this time are unprecedented, and answers cannot simply be “looked up” somewhere.

Yet, in answering each question that arose, many of which required an urgent response, my father had a clear, well thought-out and methodical response. My brother finally asked my father, “When did you have time to prepare and formulate all of these concepts in your head? When would you have ever had to consider, for example, how to deal with the question of two patients sharing one ventilator?”

My father answered: “I’ve been preparing for 80 years.”

Story #2: A well-known head of a COVID ICU at a prominent Hospital in NYC called my brother with an urgent question regarding a non-Jewish patient with COVID. My brother did not feel that he was able to answer such a serious question on his own, and he conferenced in my father to answer.

After posing her question to him, the Dr. heard nothing but silence on the other end of the phone. She began asking if my father was still on the phone. My brother had to text her offline to let her know that my father was, in fact, still on the phone, and that she should give him a minute … as he was crying from the question she had asked, and needed a minute to compose himself.

(After dealing with life and death questions all day long, for weeks on end, my father did not lose any of his sensitivity, empathy, understanding, or love for others, and with each question, carefully considered the pain and distress of each Dr., patient, and family member asking for his counsel.)

Story #3: In response to what it is like / having the pressure of being “the son of…,” my brother replied with a passage from the Talmud that my father often quotes.

The Talmud (Sanhedrin) discusses the unique Mitzvah for a Jewish King to write a Torah Scroll for himself. This Torah is meant to serve as a guiding light for the King throughout his reign / life.

The Talmud asks if a King would still have to commission his own Torah scroll if his father had also been King and had passed the throne, and his Torah scroll, down to his son.

The Talmud rules that although he inherited a Torah scroll from his father, he still must write one of his own. My father told us many times as children that every son of a King (and he was in no way referring to himself as a King) has an obligation to write their own Torah scroll and to forge their own path for themselves.

My father takes great pride in knowing that each of his 9 children forged their own independent paths to serving God and their respective communities.

Story #4: My father was asked a specific question which he was in middle of writing an answer to. A prominent Rabbi (and close colleague of my father) called my brother urging him to convince my father not to publish his response to this particular question. It was his opinion that people would not take well to my father’s answer, would pick it apart, and would be very unhappy with it.

After hours of back and forth, my father called my brother and told him, very clearly: “This is not a popularity contest. I am asked a question, and I am expected to give an answer that I believe to be the truth. If people will not like the answer, it does not mean that I should change it in order to make them happy. The Torah is truth, and I have a responsibility to uphold the integrity of the Halachik system. It is not my job to give people popular answers; it’s my job to give them truthful answers.”

Story #5: My brother set up a Zoom call for my father, Rav Asher Weiss, and Rabbi Mordechai Willig to discuss a very complex question that had come up. After hours of deliberation, my brother noticed that my father was being very quiet (though that it is not at all uncharacteristic for him) and seemed to be doing something else off to the side. When the call was over, my brother asked my father what he was distracted by towards the end of the call.

My father told him that he had been crying and reciting Tehillim (Psalms), praying for Divine assistance before making such a critical decision on behalf of the community.

Story #6: My father, by nature, despite anything going on, is a very calm person. He never gets excited or angry, doesn’t raise his voice, and doesn’t get phased by anything.

Throughout these months, my father has heard the most heart-wrenching stories, and has dealt with situations that one could never even come up with in their worst nightmares.

My brother asked my father how he has been able to remain so level-headed, calm, thoughtful and focused throughout this time, despite everything he has been dealing with.

My father told him a beautiful thought from the Baal Shem Tov which he said is what has helped him through many rough times in his life:

The very first words in Shulchan Aruch (Code of Jewish Law) are from Psalms 16:8: “Shiviti Hashem L’negdi Tamid.” The literal translation is: “Shiviti (I have set) God before me at all times.”

The Baal Shem Tov comments that ‘Shiviti’ is also an expression of ‘hishtavut’ (equanimity). If one puts a comma after the word ‘shiviti,’ the entire sentence reads differently:

No matter what happens, God is always right there at my side.

With that understanding, attitude, and approach to life, a person never has the reason, or ability, to get worked up or frazzled by anything being thrown at them.

← Is the Ancient Karaite Jewish Community About to Disappear?
Top 10 Common Objections to Wearing Techeiles Today →