A bunch of Chinese restaurant folks are thanking American Jews for eating their food during X-Mas. 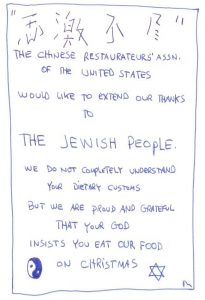 Which reminds me of an old joke:

A Jew and a Chinese person are discussing their cultures. The Chinese guy says, “Our culture is the oldest in the world, being over 4,000 years old.”

To which the Chinese guy exclaims, “That’s impossible. What did you guys live on for 1,000 years?”

← Kids! You Too Can Draw a Racist Obama in Israel!
Indiana Jones Original, Archaeologist Vendyl Jones, Has Died →