A little while ago I mentioned that in Israel the Kosher phone frenzy has gotten to a point where its sheer madness has caused a company to create Kosher cellphones, phones without internet,SMS or photography access. With 300-400,000 people of this mentality, the Kosher marketshare was too good to pass up.

However, this apparently is not good enough for some, as some Chasidic Rebbes gave calls to not only ban Kosher cellphones, but to hire thugs to seek and destroy such phones. It looks as if they’re not looking for a solution; they’re only looking to cause trouble. 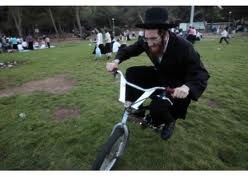 Recently in “B’Hadrei Haradim” there was an article about bicycles to be banned among the Haredi community, mainly by the Askanim of Meah Shearim by the Jewish year 5776. Why? Because they consider it Pritzusdike for a little girl to ride her bike on the streets, therefore everyone has to suffer!

Recently YNetNews reported that a woman was told in Geula, one of Jerusalem’s “frummest” neighborhoods, that “We don’t serve women here.” Her husband was served there, but she needed to go to another location 2-3 blocks out of the way to get served a ticket on Reishit Hochmah street, waiting on an excessively long line. Talk about discrimination!