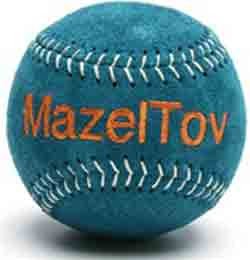 10.  In order to make it really official:  the umpire is a goy
9.    At least three guys are wearing dress pants
8.    Team is sponsored by the kosher restaurant that went out of business already
7.    The fattest shlub on the team must bat cleanup
6.    The guy playing catcher is chosen based upon his ability to actually bend down
5.    At least one 20 minute halachic debate must erupt over the infeild fly rule
4.    The pitcher actually asks you “tell me where do you want it?” after first pitch “shtickle higher?”
3.   One team shows up 20 minutes late due to rosh chodesh davening
2.   At least three guys on the team use a 10 year old named Shloime as a pinch runner
1.    Inevitably someone must call a Time out to answer a call from his wife
Original post courtesy of Bangitout.com.