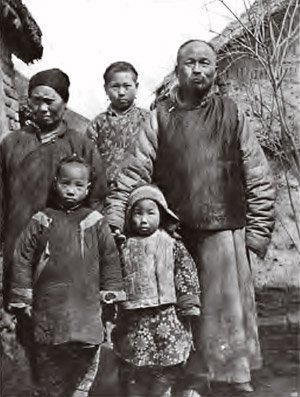 The oldest settlement of Jews in China is recorded under the Emperor Ming-Ti of the Han Dynasty in 58-76 CE. [Translator’s note: All dates from Die Juden in der Welt were given in the common BC-AD format and numbering system, as established by the Christian monk Dionysios Exiguus in the 6th century CE. I will translate iterations of “BC” or “AD” respectively as “BCE” or “CE,” or will simply state the number with no alphabetical characters.]

Chinese sources that mention Jews in the country go back as far as the 5th century CE. Under the Sung Dynasty (960-1126) an immigration took place via ship from India and a few years later via caravan from Chorassan in Persia. The new arrivals settled in Shantung, Ning-po, Nanking, Beijing, Hang-cho-fu, Amoy, and Kan-tshou. The religious center found itself in Kai-Fung-Fu [This is evidently the same as the modern Kaifeng, from where the Chinese Jews who recently landed in Israel hailed], a.k.a. Piennang in Hunan Province (400 miles south of Beijing), where a synagogue is recorded to have been built in the year 1163.

The Jesuit Father Gozani had seen the reconstruction of the restored synagogue in 1704 and an inscription: “The essentials of the Jewish religion are that Adam was our first ancestor, and our religion was founded under Abraham and later came Moses, who was the transmitter of our sacred writings. In the time of the Han Dynasty (25-221 CE) this religion was introduced to China … those who worship false gods or images of false gods pray in vain to empty phantoms, but those who revere and follow the writing know the source of all things. The Holy Scriptures and the eternal wisdom construct and complement each other; they explain and make clear from what and how mankind was made. All members of this faith strive for good deeds and avoid sins.”

While this inscription declares Judaism’s opposition to the cult of images of the heathen religions, it also revealed the efforts of the Jews in 1488 to create an agreement and commonality with the cult of ancestor veneration. It says, “Also when our religion to a large extent agrees with the religion of the learned, and only to a minor degree deviates from it, so their basic character is nothing other than the honoring of Heaven and the veneration of ancestors. Loyalty to the nobility and obedience to parents….”

The inscription also lays value to the understanding “that there is nothing contained in the religious requirements of the Jews what is not in agreement with what is stated in the six canonical books of the Chinese.”

* * * * *
In the course of centuries the community of Kai-Fung-Fu was weakened as a result of floods and wars. [Historically, China has always been subject to devastating floods.] The synagogue was rebuilt several times. It maintained no connection with the rest of the Jewish world. Occasionally one heard from China about crafty Jews through explorers and missionaries, for example, via Marco Polo in 1286, via the Jesuit Father Mattei Ricci at the end of the 16th century, and at the beginning of the 18th century via the already-mentioned Jesuit Gozani, and also via Gaubel, Cibo, and Domengo, who described the needs of the Jews in Kai-Fung-Fu, and who made a sketch of the community’s buildings and set down the inscriptions.

From the Jewish side, in 1760 a grand rabbi from London, Isaac Nieto, made a connection with the Jews of Kai-Fung-Fu. The famous Christian theologian and Hebraicist Benjamin Kennicott and Oluf G. Tychsen likewise became interested in the history of these Jews. In 1794 Shearit Israel in New York maintained a correspondence with the Jews in China.

In 1815 English Jews sought to commence connections with the community in China. In 1844 the English Consul in Jerusalem, James Finn, wrote a letter to the Jews in Kai-Fung-Fu. The answer came back after 26 years. The letter-writers complained of the fall of the community and the disappearance of relief [shipments]. There was only one woman, of 70 years of age, who knew some Hebrew. “With tears in the eyes we bring incense and beseech that our religion again may bloom.”

The number of Jews in Kai-Fung-Fu was indeed shrunken. In 1850 there were 200 souls who lived in great poverty, who in spite of the nearby presence of other believers in a temple of fire remained true in the hope that their community could one day be renewed. In 1866 the remaining foundation of the synagogue was taken apart and sold off as construction material.

In Shanghai in 1900 an organization for the development and the rebirth of the Chinese-Jewish community was founded. The Chinese government reaffirmed the rights of the community in 1902. The Shanghai community educated two young Jews from Kai-Fung-Fu in Jewish law and then sent them back out again to be teachers.

In 1908 someone estimated the number of Jews in Kai-Fung-Fu as 400. Their connection with Judaism was concentrated in the observance of a few commandments . They marry each other, eat no pork, and use no heathen musical instruments at their weddings. Outwardly they are hardly any different from other Chinese. Only occasionally does the [outward, non-Chinese appearance of] Jewish origin break through. They dress as Chinese, and the women bind their feet in the manner of Chinese women. [This is a very painful practice where feet were bent almost double back into themselves, hobbling women for the sake of what Chinese culture took for beauty. When the Communists came to power after 1948, they put a halt to it.]

* * * * *
The rites of the old Chinese Jews originate a bit from Persian practice. Concerning the slender connection with Persia, there have been found in China books that were printed in modern Persian. These books were protected in the libraries of Cambridge, Oxford, Cincinnati [Hebrew Union College] and in other places. There are copies of the Pentateuch divided into 53 sections. The prayer book of the Chinese Jews contains sections from the Mishna but not Talmud. The Sabbath was strongly observed, with the observances agreeing many times with rabbinical Judaism. Rosh Chodesh [the text says only “Neumond”] was celebrated as a full festival day.

Around the middle of the 19th century Jewish settlements arose in the port cities of China, particularly Shanghai. Baghdad Jews who had settled in India expanded farther to Shanghai. Elias David Sassoon, one of the sons of the founder of the famous Baghdad firm Abdullah David Sassoon, established himself in Shanghai in 1850; around him and his business enterprises gathered a number of Jews who later achieved prosperity, such as Silos Aaron Hardoon, the “richest man east of Suez” who died in 1931 as a Buddhist, and the philanthropist Sir Elie Cadoorie. They built a Sephardic community.

At the end of the 19th century there came about an immigration of Ashkenazim, in particular from Russia. After the Bolshevik regime change, refugees came to Shanghai via Harbin and founded in Shanghai an Ashkenazi community. The Russian Jews founded their own club, a community aid organization, an interest-free bank, a Talmud-Torah, and a Committee for the Welfare of the Brotherhood of the Harbin Immigrants.

As opposed to the Sephardim, one found by [the Ashkenazim] not only merchants and office workers (but also artisans), who, however, were unable to compete with the poor Chinese artisans. This condition and the general crisis under which Shanghai suffered greatly in the 1920s caused a portion of the immigrants to go farther, to Australia and elsewhere. [This refers to the beginnings of Imperial Japan’s invasions of China prior to World War II.]

Statistics from the year 1933 show that about 4,000 Jews lived in Shanghai, almost entirely locked inside the city quarter of the English, Americans, and the French. In 1934 there was a noteworthy immigration of Jews from Germany, above all doctors, of whom part succeeded in grasping a foothold by looking around for opportunities in port cities or in other lands.