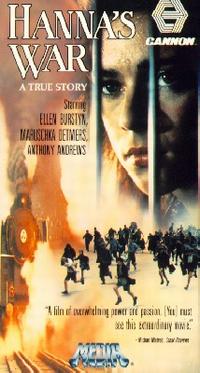 One of the Holocaust videos I watched as a child really stayed with me until today. The movie, like many, was far from a best-seller (there will only be one Schindler’s List), but I believe it was immortalized in video stores and most recently, schools. That video is called Hanna’s War, documenting the heroism of an Israeli-Hungarian woman named Chana Senesh.

I tried to find it on DVD, but to my chagrin saw that it wasn’t available as the video only earned $139,796, which is literally bubkes in the movie world. After searching high and low for a DVD, download, or something, I ended up looking for the VHS. The VHS today is quite rare since it came out in 1988, almost 25 years ago, and again, there weren’t that many copies. Those that have it don’t want to sell it so fast.

That said, I was B”H able to acquire a copy of the VHS on eBay, and shortly afterwards attempted to “dub” it into a DVD format, only to see that I could not. Apparently, the “Hanna’s War” VHS cassette tape is one of the few that is copy-protected with Macrovision protection, with the protection directly on the film. No wonder the video was never made into a DVD or download file!

Right now I can happily enjoy watching it on a VCR, but all tapes eventually disintegrate. I would like very much to somehow digitize it not only for my own personal benefit, but for others as well.

So what (illegal?) methods are available? I mean, it’s not like one can contact Menahem Golan, the producer of Hanna’s War who lives in Israel but I bet won’t “get” what it means to be immortalized by preserving the video for future generations (the guy is 83 years old – till 120). However, interestingly he is very active on Facebook.

Note: the following is for educational purposes only. I take no responsibility if you try the below and get caught.

Another way is to completely bypass the Macrovision in the DVD/VHS converter by installing what’s known as a Macrovision Killer, a box device that’s placed right in between the VHS and DVD portions of the DVD/VHS writer (yes, that means opening up and toying around with your expensive machine, possibly breaking it).

Practicality-wise, neither option makes sense for me right now. The TBC machine isn’t widely sold anymore and on eBay it goes for at least $90. Also, there’s the cost in time of learning how to use it. Somebody told me he could do it for me for $50, provided I have the rights, which I don’t. In any case, this is too much for me; I’m in no rush.

As for the Macrovision Killer, am I ready to start messing around with a $200 machine that I admittedly don’t know too much about and am worried about breaking? I don’t think so!

The video has been removed based on copyright grounds.

← BEFORE THE DELUGE: THE JEWS OF CHINA
Be Like Hillel, Not Like Shammai: Lesson on Experience and Wisdom →