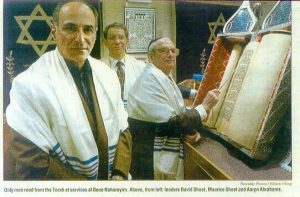 Born in 1921, the so-called Kingdom of Iraq loosely equated itself with the Babylon of old, to which Jewish settlements and culture were connected going back to the oldest of these states. In Ur Kasdim, which today is Mukajjar, stood the cradle of the Patriarch Abraham, who in his mature years wandered out to Canaan, the future Palestine. From the end of the 6th century before the Common Era there has been a dense Jewish population in Babylon. First of all Jewish immigrants gathered themselves together in Nippur and neighboring districts. At that time, it is interesting to note, a settlement on the River Kebar was founded by exiled Jews from Judea that bore the name Tel Aviv.
Other exiled Jews settled in northern parts of the land, in the vicinity of Nehardea. Not far from the City of Kiffel one finds the alleged grave of the Prophet Ezekiel, and in the vicinity of Amara on the Tigris is where the great law teacher Ezra is supposed to rest. To this day both gravesites are sought out by Jews and venerated.
The [history] of the Babylonian Jews [played out] under the Persians, then the Seleucid overlords who followed Alexander the Great, and then in particular under the Parthians, who ruled over the land since the year 139 BCE, and their conditions were favorable. In the 1st century of the Common Era there were approximately one million Babylonian Jews. If Babylonian Judaism was able to take over the spiritual leadership of the Diaspora in these first centuries after the Banishment [Translator’s Note: from Israel, 73 CE], it was thanks to its favorable social and political situation.
In Babylon the Tradition was further developed and the Babylonian Talmud was created, which to this day greatly influences the religious life of Jews. The Talmud was brought forth from the academies of Sura, Pumbedita, and Nehardea. At the city gates they declared the customs and the Torah to the gathered people. The communities had a general autonomy, and the Jews regarded the country as their second fatherland. From their spiritual influence were produced numerous converts. Entire tribes of people came over to Judaism, for example Queen Adiabene and her sons.
The Jews living in Babylon did much farming and craftwork. Irrigation of the country caused entire clans to settle near canals or rivers. The manufacture of baskets and other wicker products, of clothes and dyes, was a popular calling. The weavers of Nehardea in particular were quite successful. A considerable portion of the Jewish population busied itself with trade. They exported goods as far away as India.
Persecutions began in the 3rd century under the Sassanids. [The prevailing religion of this region, under both the Parthians and Sassanids, until the Muslims came, was Zoroastrianism.]The Jews greeted the Arab occupation of 637 with joy. Under the Caliphate of Baghdad the Babylonian Jews experienced a renaissance in economic and spiritual areas.
Gradually, signs of decline and decay became noticeable, and there came about an emigration from Babylon. From the 9th century one encountered Babylonian Jews in Palestine, Egypt, in different areas of North Africa, and also in European countries. Immigration of Jews to Babylon, which still took place at this time, did not make up for the rising emigration.
Up until 1050, the spiritual leadership of Judaism lay in the hands of the Leaders of the Exile, who were descendants of the House of King David, but at this time these Exile Leaders lost ma great deal their prestige and public regard and were dissolved by the chiefs of the teaching academies, who had taken over the leadership of the Babylonian Jewish communities and the Diaspora of Jews worldwide.
But with the shift of Jewish spiritual centers to North Africa and Spain, to Italy and France, the Babylonian main academies forfeited a lot of their influence. The old teaching academies lost their reason for being and, moreover, had to be supported from abroad. The learned men abandoned the spiritually decaying communities and moved to the West. The decline was palpable at the end of the 10th century.
The losses via emigration appear to have consisted mainly of the leadership, the spiritual guiding elements, for one finds Benjamin of Tudela and Petachia from Regensburg reporting on the Babylonian communities in the 12th century and noting that their economic situation wasn’t bad. Jewish trade in Babylon extended itself to Persia, India, and Yemen. However, in the 14th century the Babylonian settlements prepared for their end. The Caliph’s kingdom succumbed to the troops of Tamerlane and no longer had the strength to hold itself up. [Tamerlane was one of the most notorious mass murderers of the Middle Ages, leading Mongol armies over sizable areas of Asia, much as Genghis Khan and his followers had done a few centuries before, leaving death and devastation in his wake.]

Since the 15th century there has flowed only sporadic news of the Jews of Babylon. In 1632 the French traveling researcher Tavernier found only about 15,000 Jews in Baghdad. This once strong community had lost all its historical significance.

← Seven Strategies for Surviving the Recession – Strategy 3 – Standing for the Mitzvah of Giving Tzedakah – Rabbi Paysach Krohn
Landers “Shabbos Kodesh Niggun”: The story behind it →