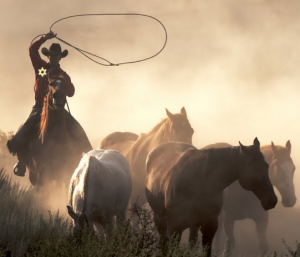 While looking for shiurim from my Alma Mater, Landers, I came across this blog post. It takes me back since I graduated from there in 2005 and I remember Dovid Yudkowitz, Rabbi Bamberger, and the rest of the Chevra.

The author is anonymous, so I unfortunately cannot give credit where credit is due. Great song though! It has a “wild west” edge to it.

“For those of you who were wondering where this catchy niggun came from, here is the true story.

The year was 5767. It was Purim once again and Rabbi Moshe Bamberger Shlita (Mashgiach Ruchani of Beis Medrash L’Talmud in Queens, N.Y.) was having his annual Purim seudah with some of his closest talmidim. The atmosphere was full of simcha, the food was exquisite, and the niggunim were leibidik.

Suddenly, Rabbi Bamberger motioned for the olam to quiet down. He had something to share. “Rabosai”, he started. “A few months ago, me and my son, Shlomo Zalman, began to compose a beautiful niggun”. “However,” Rabbi Bamberger continued, “we have a problem. The niggun is still not complete. We were only able to compose the first part of the niggun and we need to compose the second part.”

The talmidim were all listening very intently to their Rebbi. “Rabosai”, he continued, “we are going to complete this niggun right here, right now.” A silence passed over the crowd as all of the talmidim were wondering what their Rebbi had in mind. “I will teach you all the low part and we will sing it a few times.” “Then, once we all know it and have commited it to memory somebody here will compose the next part.” And so it went. Rabbi Bamberger taught his talmidim the low part of the niggun. The talmidim were mesmerized by its beauty.

Finally, Rabbi Bamberger motioned once again for silence. “Rabosai”, he announced, “we will sing the low part together once again, but this time around, when we sing through it twice, Reb Dovid will sing the high part.” A look of shock spread across the face of Dovid Yudkowitz (the Av Bayis of Beis Medrash L’talmud) . He was clearly nervous, but at the same time he was ready for the task at hand.

And that my friends is the story behind the niggun. Enjoy!!!”

← BEFORE THE DELUGE: THE JEWS OF IRAQ (PART I)
Seven Strategies for Surviving the Recession – Strategy 4 – Giving Tzedakah More Generously Than Ever – Rabbi Paysach Krohn →