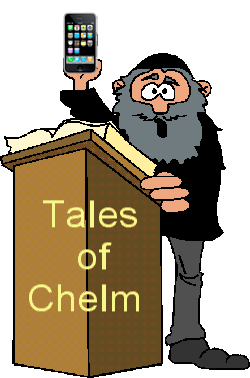 Once upon a time in the silly world of Chelm, Mottel the doctor arrived from Minsk carrying an iPhone.

Everyone that met Mottel oohed and aahed at his new toy. Until then, most in the village either went to a friends house to talk, saw their friends in shul, or communicated by telegram. At the town hall was the one operable phone in the village, which was a rotary one that used separable receivers and speakers. This was revolutionary.

Some asked to play with the apps on the phone, asked what things like “internet,” “Email” and “YouTube” were, and such. These folks were for the most part very excited about the technology. Others were less enthusiastic about it, claiming that the new technology was destroying their way of life.

A few days later, the old Sage of Chelm suffered a mild heart attack. Thankfully he was rushed to the hospital in time and recovered shortly.

Being a spiritual man, the Sage not only performed a Cheshbon Hanefesh (accounting of ones soul over ones lifetime) but also an accounting of recent changes in Chelm. How was the water? Great, people were still drawing it from the well. Honesty in business? Here and there people cheated, but for the most part business in Chelm was being run in an ehrliche and honest manner. What about new foreign items brought into the town? Well, there was the iPhone!

The Sage, upon being released from the hospital, was concerned about the iPhone’s voodoo powers and that it had more computer power than what initially sent man to the moon. Also, with “internet” he was concerned that the possible viewing of immodest women would hurt the nation of Israel starting with the spiritual leaders. He blamed the iPhone for his heart attack and was concerned that in due time, the iPhone would kill all the Gedolim.

Therefore the wise Sage issued a takana to destroy all iPhones and related smartphones. An asifah was held in the town shul where a public demonstration was made against iPhones, starting with the “Kel Malei Rachamim” prayer. It was then ruled that anyone possessing such a device would not be permitted as a kosher witness in Beis Din and for that matter for a marriage contract. They wouldn’t even be allowed to give a Bracha at a wedding!

And now, dear friends, you know why Chelm remains a backwards village to this very day.

Note: This is a parody on a recent article from BeChadrei and LifeInIsrael, where smartphones were blamed for killing Rabbi Elyashiv ZT”L:

“Recently we have heard of gedolei yisroel who have passed from this world, everybody must arouse themselves [to teshuva]. Rav Elyashiv and the Admor of Shomrei Emunim were murdered due to the yeshiva bochurim and kollel avreichim who use smartphones.”

← BEFORE THE DELUGE: THE JEWS OF IRELAND
The First Shlemiel →