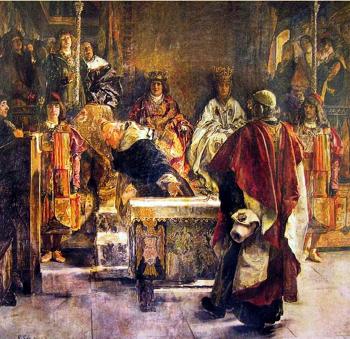 Chasdai ibn Schaprut (905-970), leader of the community in Cordoba, was the physician and prime minister of the Caliph Abdurrachman III. Ibn Schaprut presented a shining new way of combining Jewish teaching with secular knowledge. He forged relations with the Khazar King Joseph. That independent Jewish-believing kingdom in Eastern Europe [Translator’s Note: arguably Asia, just north of the Caucasus Mountains] worked a powerfully attractive impression on ibn Schaprut. The German Jew Isaak ben Elasar was sent by him with scriptures to the Khazar capital of Itil, from which developed a historically significant exchange of letters.

In his embassy to the Khazars, Chasdai painted a picture of “Sefarad,” the Spanish kingdom where Jews live happily: “Out land is fertile, rich in springs, rivers, and wells. It is a land of grain, wine, and oil; it is also rich in fruit and spices, covered with vegetables and orchards, and from its ground grow all kinds of fruit-bearing trees and mulberries, and we actually have an excess of silk . Our king accumulates treasures of gold, silver, and all kinds of luxuries. His Majesty is richer than any other king of the past. His annual income which he derives from shipping is one hundred thousand gold ducats; so much the foreign merchants alone bring in who enter within the administrative jurisdiction which I personally oversee. All the rulers of the world, who behold the call of the greatness and power of our king, send him gifts, in order to assure his goodwill .”
In the wake of the Arab expansion, the Jews pushed forth and established settlements in Granada, Lucena, and Seville. After the 12th century the Arab expansion ceased and a decline set in, but it had no effect on the peaceful Jewish expansion, so that a century later, the Christian kingdoms of Castille and Aragon possessed a [Jewish] population of 234,000. (One hears without evidence of as many as 850,000.) Around 1300 Castille alone numbered around 120 Jewish communities – Toledo, Burgos, and Seville housed the largest. Even at the end of the 14th century, amidst signs of decline, 200-400 families on average lived in the small and medium-sized cities, which was one-fifth to one-third of the total population.
The commercial lives of the Spanish Jewry – initially – experienced no change under Christian rulership. Land ownership, land and tax administration, merchantmen, gold dealers, craftsmen – one could conduct one’s profession in Christian Spain as before. The Jewish craftsman was a typical figure of Spanish life, just as he was in Poland. In Germany, on account of its strict guild system, Jews were unable to operate in craft trades, so what was left to him nothing remaining but the thankless, unproductive profession of credit transactions.
But in Spain one always knew what Jewish diligence was, and one could appreciate how the Jews derived joy from working with their hands. A walk through the old Middle-Aged city of Saragossa suffices to illustrate the point. In the Jewish quarter one could see the Street of the Tanners, or the Cobblers, or the Saddle-Makers, the Jewelers, or the Swordsmiths. The City of Tudela in Navarre was the city of Jewish tanners. Jewish weapons-makers were known far and wide.
There were also blacksmiths and masons. And there were also wool-weavers and silk-weavers and dyers, whose artistic competence proved to be particularly worthy to export, in the event the Spanish Jews would be compelled to seek refuge in faraway Turkey. However, at this time, Jewish financiers, secretaries to royal chancelleries, tax-administrators, all seemed to be indispensable .
However, even as the nobility needed the Jews for their administrative skills, the clergy adopted an anti-Jewish policy . The anti-Semitic agitation had begun to set in during the latter half of the 13th century. Protection which was offered to the Jews under royal and noble power proved to be too weak against the power of the Church and the commercial classes. The attacks were against Judaism itself, whose teachings were put to the test in officially required disputations. [This was the time of the famous Disputation in Barcelona between Rabbi Nachmanides (Ramban) and the Jewish renegade Dominican monk Pablo Christiani.]
The politically powerless synagogues were forced into an adversarial stance against the Church. A bitter experience was at hand to the true believers in Judaism via the mendacious writings of traitorous baptized Jews who didn’t scruple from advancing any kind of slander. The Jews replied with written defenses of Judaism, and in 1354 in Aragon formed a militia for defense against physical attacks.
From their pulpits the clergy called for action. In Seville a mob fell upon the Jews on June 6, 1391, resulting in a horrible massacre. The pogrom raged for three months in Andalusia, in Toledo, and on the coast from Valencia to Barcelona. Whoever was spared from the massacres in these places had the choice to flee – one could go to North Africa, to Portugal, or to Turkey – or convert to Christianity. It lasted for two decades, before the community could be rebuilt to a certain extent. In the big cities there was hardly anything left to reconstruct. One preferred to live in districts controlled directly by the nobility, and settle there in small communities. One exception to this was the reconstruction in Andalusia, the last stronghold of the Moorish hegemony.