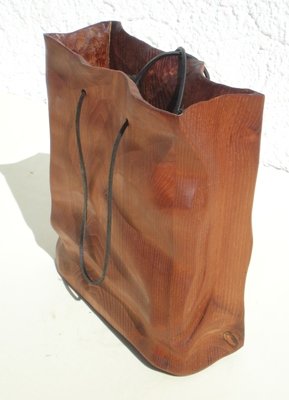 The next time you visit Chelm, you might notice that the garbage bags are made of wood rather than plastic. There actually is an interesting story.

Years ago, the city was worried about the wastefulness of its inhabitants. One of the deep concerns was on plastic bags. Therefore, in order to discourage the use of plastic bags and encourage the usage of cloth bags, a 5 groszy fine was placed on each plastic bag taken from the local grocery store.

This angered the residents greatly and there was an initial great deal of protest. The residents even took this to city hall.

Well, the mayor wasn’t too happy with the residents complaining and decided to make a move to drop the fine, feeling that the residents learned a valuable lesson on recycling. The motion was upheld. However, when that happened, the town treasurer who apparently was earning money from these small fines decided to make an additional motion to completely ban those plastic bags.

As it was, the ban was passed and, when an appeal was made, it unfortunately was rejected. The townsfolk then tried to use paper and cloth bags, but those didn’t work. Paper got easily wet and ripped. Cloth bags started to stink very fast.

The townsfolk then took it up to the wise sage of Chelm. “It seems,” the wise sage pointed out, “that the solution is to recycle as best as possible. Why not use wood? Wood, when not burned, easily decomposes.”

The townsfolk asked, “what about the trees?”

Everyone marveled. What wisdom! What foresight!

And so it was.

← Heaven Is Real: A Doctor’s Experience With the Afterlife
Jerusalem – Anti Technology Rabbi Amnon Yitzchak “Explains” His Own iPhone Usage →