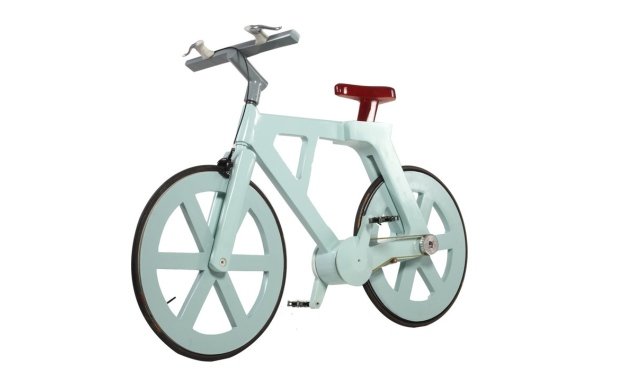 50-year-old Izhar Gafni had a dream: to build a cardboard bike. The bicycle was something that everyone said could not be done and Mr. Gafni has shown everyone wrong!

This bike was weight-tested as well as verified as waterproof by taking some of the cardboard, shaping it into a fish and putting it in a bucket of water.

The best is Itzak Gafni’s wife’s reaction, which is classic of all Jewish wives. Basically she told him with “those eyes,” “Do it or else I will never hear the end of it.” Tell me, is that not a typical Jewish-wife answer?

It’s hard to see it in action and not say “wow!”

“When we were told it’s impossible, we knew it’s the right way to be done.”

“It’s kind of fun to do the impossible.”

What started as the vision of a self-proclaimed bike freak — the mass-production of bicycles made entirely from recycled materials — is rapidly becoming a reality. And one amazing succes story. After we reported on 50-year-old Izhar Gafni’s cardboard bikes, media outlets around the world followed suit.

After four years of perfecting the bicycle, it is about to be mass-produced and sold for $20 a piece.

“I was always fascinated by applying unconventional technologies to materials and I did this on several occasions. But this was the culmination of a few things that came together. I worked for four years to cancel out the corrugated cardboard’s weak structural points,” Gafni told Reuters.

Gafni’s bike is not only durable, but it is water and fire proof, thanks to a secret blend of organic materials he coats the bike with. The bike’s entire frame is made of recycled cardboard, folded in a specific way that makes it durable. The tires are made from rubber, produced from used car tires.

Gafni Riding His Bicycle
Although some of the prototype’s parts are made of metal, Gafni assures that the mass-produced model will be made entirely of recycled materials: “I’m repeatedly surprised at just how strong this material is, it is amazing. Once we are ready to go to production, the bike will have no metal parts at all,” he said.

According to Gafni and his business partner, Nimrod Elmish, a veteran player in the Israeli startup and investment scene, the bicycle is not just a good replacement for contemporary bicycles, but in many ways – it is actually better. The rubber used for the tires is condensed, rather than inflated, so it cannot puncture and should last up to 10 years. Moreover, the bike doesn’t use a standard chain: “These bikes need no maintenance and no adjustment, a car timing belt is used instead of a chain,” Elmish told to Reuters.

After receiving worldwide exposure, Gafni is confident in the success of his eco-friendly bike: “When we started, a year and a half or two years ago, people laughed at us, but now we are getting at least a dozen e-mails every day asking where they can buy such a bicycle, so this really makes me hopeful that we will succeed,” he said.

Within months, Gafni and Elmish say, mass-production of three different models for the bike – and even a cardboard wheelchair – will begin. “In six months we will have completed planning the first production lines for an urban bike which will be assisted by an electric motor, a youth bike which will be a 2/3 size model for children in Africa, a balance bike for youngsters learning to ride, and a wheelchair that a non-profit organization wants to build with our technology for Africa,” Elmish told Reuters.

← Who’s Afraid of Change? Rethinking the Yeshivah Curriculum
Today is the Yahrtzeit of Reb Shlomo Carlebach →