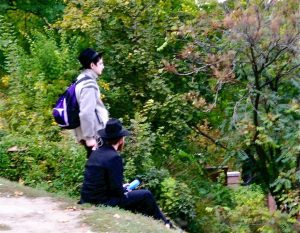 The adaptation to the prevailing Magyar culture progressed. A rabbi named Isaac Eisik Taub of Nagy Kallo, who arose from the world of Polish chassidism, wrote poetry in the nineteenth century in Hungarian. To this day the Hungarian Jews sing his folkish-worded poem “A Bird.” The books of sacred writing were translated into Hungarian, even the tractate Pirkei Avot. In the synagogues, preaching was done in Hungarian.

From the time of the Revolution of 1848, the patriotism of the Hungarian Jews manifested itself in many different ways and became proverbial. Hungarian Jews enlisted in the Hungarian Army in massive numbers. Of the 180,000 soldiers of the Honved Army, a ninth part, or 20,000, were Jews – this at a time when Jews comprised just 1/30th of the general population.
Many Jewish soldiers were given battlefield promotions and were awarded medals for bravery. At the end of the 1850s there arose voices from Hungarian politicians advocating general personal and citizenship rights for Jews. In 1867 the Jews were granted the emancipation which they’d so long desired and ceaselessly fought for. In the 1880s, however, Jew-hatred flared up in the land, and voices were raised in the Reichstag for a revocation of the emancipation.
The government held fast against these forces, and, in 1895 passed the Reception Law, which recognized the co-equality of the Jewish religion alongside the various Christian sects. The era of liberalism made it much easier for Jews to assimilate. In districts with mixed populations this manifested itself with Jews becoming bearers of Hungarian thought. Often the Jewish schools were the only ones with instruction in the Hungarian language, and were sought out by non-Jews. Jews were strongly represented in the country’s civil service, in city administration, in free professions, and in economic life.
The Jewish population in 1869 stood at 552,133 souls (3.6 percent of the population), and climbed by 1910 to 932,458 (about 5 percent). Particularly strong was the growth of the Jewish population of Budapest, which in 1869 stood at 44,890 (16.6 percent of the city’s residents) and which climbed to 203,687 souls (24 percent) by 1910, meaning that every fourth resident of Budapest was a Jew. The young Jewish generation surged toward middle and higher education. At the academic high schools of the capital during the years 1910-1913, 35 percent of the students were Jewish; at the vocational high schools it was 40 percent and at the university it was 50 percent.
In the [First] World War, the Jews demonstrated their solidarity with Hungary with 10,000 Jewish soldiers falling on the battlefield. This didn’t prevent the “Awakened Hungarians” of accusing the Jews of a lack of patriotism, and the new Hungarian regime sentenced 44 Jews to death for being “counter-revolutionaries.”
[Translator’s Note: During World War I, Jews in Hungary were being killed by two opposite sides. On the left was the Communist government, which seized control of Hungary for about two months in 1920. It was led by the Jew Bela Kun, and about 4/5 of his ruling cadre of Communists were also Jews.During their time in power, they murdered about 6,000 people in the name of Communism.By and large, their victims were members of the wealthy capitalist or bourgeoisie class who were class enemies of the Communists by definition;a majority of these were Jewish themselves. After about two months, a right-wing putsch led by Admiral Horthy threw out the Communists and executed as many as could be found.Naturally, many of these were also Jews.]
The census of 1930 found 444,567 Jews (5.1 percent of the total population), 28,788 fewer than in 1920. In Budapest there were 204,371 Jews in 1930, as opposed to 215,212 in 1920. This appears to be a consequence of a lower birth rate, in that a birth registry from 1926 shows a birth rate of 13.1 per 1,000 population. (Only Germany shows an even smaller birth rate.)
Provincial capitals from the census of 1930 show these numbers: Miskolcz, 10,862 Jews (17.6 percent of the city’s population); Debreczin, more than 10,000 (8.5 percent); Pecs 4,000 (6.5 percent), and Szegedin 5,560 (4.1 percent).
The list of commercial occupations (as follows) is based upon the census of 1920, since the figures from 1930 have not yet been prepared; these (previous figures) show the following picture: 8,655 Jews were gainfully employed in agriculture, 63,872 in manufacturing, 89,065 in trade and money exchange, 6,516 in transportation, 17,554 in civil service and miscellaneous professions and 16,410 in specialized professions.