Taken from “On the Main Line“:

The story which, again, is contained in the Landau biography, goes something like this – but before I give it, here is what it is preceded by, which is worth quoting for it implicitly acknowledges the absurdity of the story, even as it somehow gives it credit for being a story of “the time,” presumably the time of the Gaon himself:

The following story gives one a sense of how people of the time understood the conflict between the Gaon and the maskilim. It also illustrates the naive view people had of science-a weakness the Gaon tried to ameliorate.

The story is that the curators of a Russian museum had obtained some kind of precious mineral which reputedly possessed remarkable powers. Scientist could not figure out the secret of the stone, so they decided to send it to Germany, where the real great scientists were! They also couldn’t figure it out, among them was Moses Mendelssohn, who suggested that they send it to the Vilna Gaon. Two German professors (Shulman says they were short and bald!) went to Vilna and brought the stone to the Gaon. The latter instructed his shammash to bring him a glass of water. The Gaon dropped the stone into the water and – poof! – the water disappeared. Seeing the shock, the Gaon explained to the German scientists that the stone was a sapphire and that when water comes into contact with sapphire the two elements of which is is composed separates and it reverts back to hydrogen and oxygen.
When the dumbfounded scientists returned to Germany and told everyone about the amazing rabbi in Vilna, Mendelssohn was excited and exclaimed that with this we can understand a naturalistic explanation for the splitting of the Red Sea! Moses’ staff was made of sapphire, according to rabbinic tradition. When Moses split the sea with his staff, it was through the alchemic properties of sapphire!
When the Gaon was told of this “he was outraged. “Heretic!” he proclaimed.” He then explained that the verse says harem et matekhah lift your staff and neteh et yadekha al hayam stretch out your hand over the sea (Ex. 14:16). Harem here means lift, but it also means to remove, set aside. So what actually happened was that God told Moses to set aside his rod and then stretch his hand over the sea – specifically so that the miracle was supernatural. This indeed was the miracle! He had a sapphire rod, but he used his hand.
Shulman often gives sources and here too he writes that it is to be found in Hagaon Hachassid pg. 375. The story is completely missing from the Rosenblum book published by Artscroll. You can see that Shulman himself knows it’s bunk, hence the preface “the naive view people had of science.” He doesn’t spell it out further, doesn’t note how even aside from the oddity of the belief that sapphire can separate water into hydrogen and oxygen, that the chemical composition of water was not even known until (shortly) after the Gaon died (link). Unless, of course, the Gaon already had discovered it. Interestingly, in the preface to the book Shulman relates all the sources he used, the ones you would expect. However, he pointedly writes that one famous work, “Toldos Hagra was not used despite its many anecdotes, because no sources are given.” The whole thing is remarkable. And there are sources for this? As I said, Shulman himself has to obliquely note that the story is obviously a tall tale.
But it must have a source, so what is the source? For that we look at Landaus’ Hagaon Hachassid. 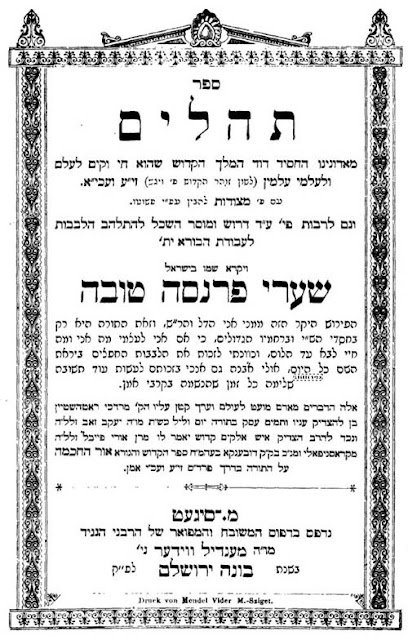 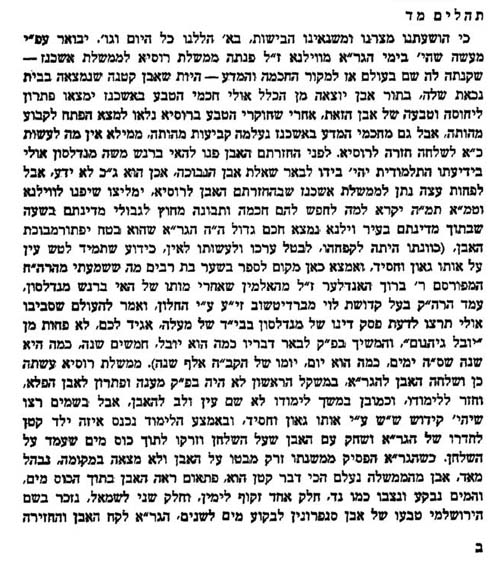 As you can see, this story is given to illustrate Psalm 44:8, “But Thou hast saved us from our adversaries, and hast put them to shame that hate us.” Be sure to read it all for a nice story about how the advocate R. Levi Yitzchak of Berditchev explained how long Mendelssohn’s Hell-sentence was: a yovel of Gehennom. What is a yovel in Gehenna? If a yovel (jubilee) is 50 years, then 50 years x 365 days x 1000 years per day, as a thousand years is but one day in the sight of the Lord. Doing the math we see that 50 x 365 x 1000 = 18,250,000 years. Since Mendelssohn died in 1786 this means that he has 18,249,774 years to go.
At any rate, this Chassidishe Mendelssohn story did not make it into Rosenblum’s translation of Landau’s Hagaon Hachassid, and conveniently the Gaon’s Torah commentary Aderet Eliyahu does not cover Exodus 14.
Interestingly, the Misnagidm did not know that Mendelssohn was doomed to 18 million years in Hell, and there was a time when the following did occur.
In 1799 an anonymous book called Sefer Ha-bris was printed in Bruenn. It was written by Rabbi Pinchas Eliyahu Hurwitz of Vilna (1765-1821), although no reader would have known it at the time, unless you knew the author (and he left hints, as we will see below). He writes that he published it anonymously, but not because he is overly modest or pious, but because of an incident: in the early stages of writing the book in Butzatz (sp?) in Galicia, due to his excessive exertions in putting together this work, day and night, he exhausted himself to the point where he lost his eyesight. For an entire winter he rested and tried remedies, but nothing worked. So he set out to Lvov, and visited doctors for six months. Finally his eyesight was restored. He recalled that he had made a vow, that if God will allows his eyesight to be restored, and he could complete the book, then he would print it without his name. He continues, explaining that he got better, he finished the book in Haag, and that a certain rabbi wanted to release him from his vow for various reasons, but he declined. So the book was published without a name.
In the censor’s page, Karl Fischer describes the book as full of “firsternen, kometen (astronomy), logik, physik, geographie, botannik, optik and anatomie.” In other words, it is a science book. The censor further notes that the book was already printed in October 1797 (which, I think, will be somewhat significant, as the Gaon was still alive then). The censor’s note is dated January 21, 1799, and the book was published the same year. 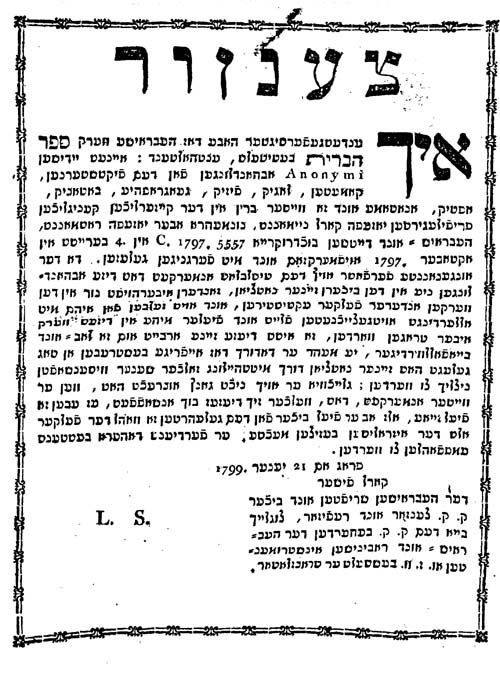 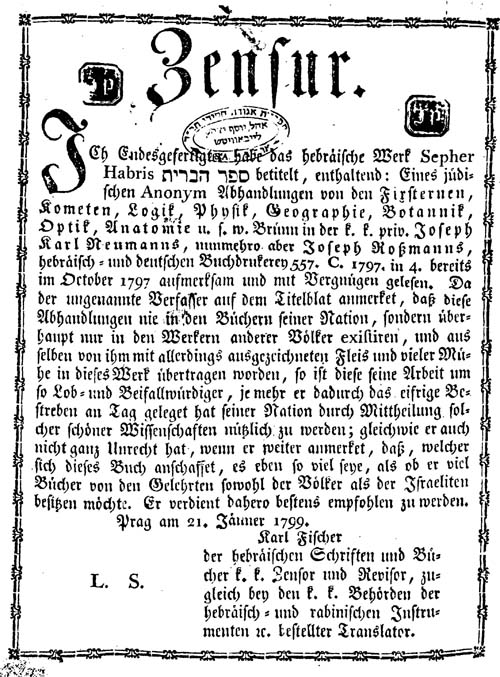 The book came with several haskamos from important rabbis of the time, the author’s name removed from each one. In order of print, the approbations are from: Rabbi Saul and Rabbi David D’Azavedo, respectively Ashkenazic and Sephardic chief rabbis of Amsterdam, Rabbi Aryeh Leib of Rotterdam, Rabbi Yehuda Leib of the Hague, Rabbi Yitzchak of Krakow, Rabbi Moshe of Ofen, Rabbi Yitzchak Avraham of Pinchev.
The book became an instant classic, eventually being reprinted many, many times. It discusses everything from America to geese that grow on trees in Scotland.
In Chut Hameshulash, the biography of the Chasam Sofer written by one of his grandsons, Rabbi Shlomo Schreiber, in consultation with the elder members of his family and many others who knew the family patriarch, one footnote remarks that the Chasam Sofer said that he had had an idea to write a science book for yeshiva students, so they could know what they needed to know without having to read science books written by gentiles. However, when Sefer Ha-beris appeared, he realized that it had already been done! so this is the book he recommended for his students. (Just prior the footnote had mentioned that one time the Chasam Sofer was extolling the manifold virtues of his father-in-law Rabbi Akiva Eger; his holiness, asceticism, humility, meticulousness in observance. Notably absent was praises of his sharpness in learning, so the Chasam Sofer’s son pointed out to him that he didn’t mention it. The Chasam Sofer affirmed that he didn’t mention it, but said that it’s because his own method of learning is superior to Rabbi Akiva Eger’s, essentially because it is less pilpulistic!)
The grandson goes on to note that his great purpose was to clearly explain the halacha, and for this purpose the Chasam Sofer owned two anatomical figurines, one male and one female, with removable organs. He used these figurines to learn and teach the relevant biology, although he only showed them to his best students, who were suffused with yiras shamayim, when teaching the laws of niddah and the like.
He continues to explain (claim?) that the Chasam Sofer was an expert in surveying, algebra, and the science behind the laws of kiddush hachodesh, which he was particularly knowledgable in. He also knew medicine, logic and physics. (In connection with this, in the introduction to Pe’as Hashulchan we are told that the Vilna Gaon, who mastered all knowledge except medicine, was not trained in medicine because his father felt that he would have been obligated to cure people if he knew medicine, and that would have been bittul torah.) It is after enumerating the secular subjects mastered by his grandfather that he relates that the Chasam Sofer had planned (or started?) to write a book on all these topics for his students until he read Sefer Ha-brit and realized that the work had already been done. It should be pointed out that in 1799 the Chasam Sofer had alreadyobtained the rabbinical position in Matersdorf, where he had a yeshiva, probably a small one, so this is not talking about his students in the yeshiva in Pressburg. So whatever happened to rabbis and roshei yeshiva writing and approbating science books?
At any rate, even though Rabbi Pinchas Eliyahu printed it anonymously, he began with a hint to his name:

Ani Pinchas Eliyahu ben Meir Vilna, “I am Pinchas Elijah ben Meir [of] Wilna.” Clever!
And he was more clever yet. Here are how two further sections open:

The next edition of this book was printed in Zolkiew in 1807. This time the author included his name and a new preface. In it he writes about what a sensation the book had been and what sort of reception it had received. As you can imagine, an unusual, interesting book like this, and an anonymous author? Let the guessing begin!

“No longer anonymous . . . [but] some had said the author must be the famous Chassid of Vilna; others said that the Scholar of Berlin wrote it. Still others said that one man did not write it, for it was not possible for one man to have such breadth of knowledge . . . “

Again, as I pointed out earlier, although it was distributed in 1799 the censor’s note makes it clear that it was already printed in October of 1797, and the Gaon was still alive then. Of course Mendelssohn was already gone since 1786, but the point is that it was at least plausibly a work of the Gaon’s, even if in retrospect such speculation seems naive. Thus, we see that there was a time when the public could actually believe that the same Torah-Science work was either written by the Vilna Gaon or Moses Mendelssohn.
[1] The Gaon’s surname was not Kramer. He had no surname. He was descended from a rabbi who was called Kremer, Yiddish for shopkeeper. See here where I shared an image from the 1765 census where the Gaon is called Eliasz Zelmanowiz. His surname was not, of course, Zelmanowiz either. This was a patronymic employed as a surname for the purpose of the census.