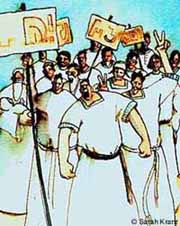 In Parashas Korach we saw that Korach and his followers tried to instigate a rebellion against Moshe Rabeinu. In one example we see him and his male followers wearing garments soaked in Techeles blood, then asking Moshe if such a garment needed a string of Techeles. When Moshe replied “yes” they laughed.

This to me is an example of typical assimilation. For example, today Torah observant men need to cover their heads and women need to wear modest clothes. However, it wasn’t that long ago (1950’s – 1960’s) when in the United States, Canada and the rest of the western world, the values were wholesome and all men wore hats, while all women wore (relatively) modest dresses. Some Jews kept true to tradition and went above and beyond, for example, wearing a large Yarmulke jutting out of the back of a hat, and women wearing oversized Sheitels. In terms of Kashrus, in those days for example, you were able to tell that a candy bar was kosher just by looking at the ingredients. Some more stringent made sure they had practically only fruits and vegetables as that was the only thing truly Kosher 🙂 .

In Israel today I see people moving there and either becoming more observant or less. People that move there get easily confused. The Charedim, the super-religious, in Israel take on Chumras that make us Chutznikim go wild. The lesser religious, i.e. men without Kippot and women wearing shorts and pants, are still able to quote Tanach inside and out. The society there knows Torah inside and out and one doesn’t feel as compelled to be “as religious” to be a good Torah-abiding person, since the land itself is soaked with those values (i.e. the Techeles blood) today.

The examples given above are symbolic about the society at large. What if the society (the garment), was full of Techeles (values that corresponded closely with Jewish values)? Would we need to observe our rituals and perceive everything else of having secondary value (having one blue string around white strings)? Moshe’s apparent answer to this was that yes, we still needed to observe our rituals, even if they seem superfluous.

I know that Korach is already 2 weeks old but I just thought to add this insight. Shavua Tov!

← Women Of/Off the Wall – Some Facts
Chukas – Hitting the Rock – What Was So Bad? Different Generations and Being Out of Touch →