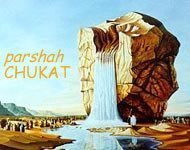 Parashas Chukas, like the name, mostly talks about Chukim, laws not necessarily with reason. These were laws that, no matter what, we still had to do them. This in many ways reflects the degree of Emunah of the “new” generation of the Midbar, as the old one had already died off.

In Parashas Chukas one of the episodes is where Moshe hit the rock. Hashem told Moshe to talk to the rock, and when Moshe did speak without any apparent results, he hit the rock. The rock miraculously spewed forth water and Moshe was punished by not being able to lead the nation of Israel into Canaan.

Our sages tell us that Moshe’s job was to cajole a living, yet stationary object into willingly giving water. After all, Moshe was able to command the Yam Suf to split, albeit not without some resistance from the water since it was born earlier (source: Midrash). Moshe never hit the water, he merely raised his hand and the sea split. His staff was already set aside prior to raising his hand, so he did that before.

On a similar vein, Moshe hit a rock in Rephidim in Sefer Shemos without punishment, so to him, hitting a rock for water was a method that already was tried, tested and true.

I believe that this shows the vast difference in generations. Moshe was the right leader for the previous generation that wasn’t like the generation born in Sinai. He was able to speak to water, an already-refined product, and hit a rock, a raw product to spew out water, a refined product. Using the rod was what worked in that generation. However, this wasn’t what worked in the following generation. The following generation needed a leader to speak and cajole one into doing things – not hit to get his way. In Moshe trying yesterday’s methods for today’s generation he proved that he was too “out of touch” which signified that he needed to be replaced by a leader that could relate to the newer generation.

How relevant is this in today’s generation! It wasn’t long ago when Cheder Rebbis used a whip or ruler to slap onto student’s wrists to “wake them up.” Today they would be fired by today’s schools. Even today, there are corporate dinosaurs that have been in a company for many decades with strong opinions against progress that would make company operations work faster and more efficiently. Eventually, they get fired/let go with some sort of pension. Moshe in this respect needed to get “fired” as it is by Hashem as he wasn’t “with it” for the later generation.