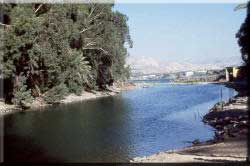 The Yarden is a very long, narrow winding river that starts way up north, eventually pouring its waters into the Kinneret and then continuing on until it goes into the Dead Sea. It forms the eastern Biblical border of Eretz Yisroel.

The word Yarden is made out of two words ; Yored Dan – it comes down from the Dan. That’s because it begins in Dan’s territory. It gets most of its waters from four major sources; from the melting snows of the Chermon mountain which form Nachal Chermon (the Banyas), from Nachal Snir which starts way up in Lebanon and from Nachal Iyun which also starts in Lebanon and goes past Metulah, and from the Chatzbani which comes down from Shmurat Tel Dan. 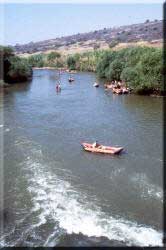 This was the river that stopped its flow and stood still in its tracks on the 10th day of Nissan, allowing Yehoshua and the Bnei Yisroel to cross over to the other side. The Bnei Yisroel were commanded to place 12 large stones in it as a remembrance of the great miracle that took place here. The place they crossed over was directly opposite the city of Yericho. From here they also took 12 stones, which they set up on the mountain of Avol. (Devorim 27). This is also the river in which the Novi Elisha had Na’amon the general of Arom immerse himself in order to cure himself of his tzora’as (leprosy). It was also the river which Eliyahu Ha’novi split and from where he was taken by a flaming chariot into the heavens.

The Yarden widens during the spring and many a time can change its snake-like course as it winds down south into the Yam Ha’Melech. The tribes of Reuvain, Gad and half of Menashe were given the land to its east. Nowadays the Yarden acts as the border between Israel and Jordan. 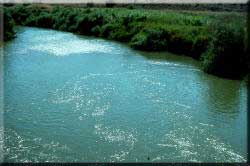