Exhibit 10a- The “Moshiach” Inscription. In the seventh century the Persians conquered Eretz Yisroel from the Christian Byzantines. The Persians gave the Jews permission to rebuild their Bais HaMikdash. Preparations were made and the construction began. One Jew, thinking that Moshiach was about to arrive and would herald the “t’chiyas ha’maysim,” the resurrection, carved a “pasuk” on the Western Wall, under Robinson’s Arch. (See Room 19.) It is from the haftorah of Shabbos Rosh Chodesh and reads. “And you shall see and your hearts shall rejoice. Your bones like the grass will spring forth.” The last word is missing from the inscription. Also, the inscription actually reads “their bones.” It should say “your bones.” Before the Jews could complete the building, an earthquake destroyed their work. Shortly thereafter, the Byzantines regained Jerusalem and banished the Jews. The time for Moshiach had not arrived. 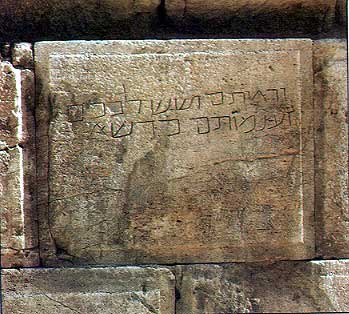