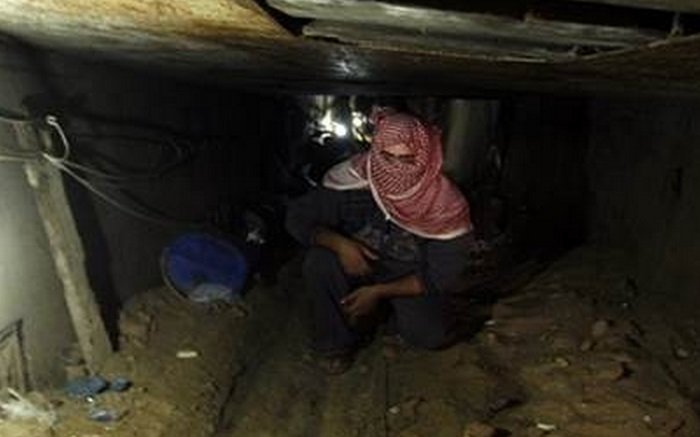 A major terror attack was prevented when soldiers identified and eliminated a threat emerging from a Gaza terror tunnel.

The IDF released a video Thursday morning detailing the attempt by Hamas terrorists to conduct a major terror attack in Israel by infiltrating through a Gaza terror tunnel. The 13 terrorists involved in the attempted attack were apparently surprised that they were being observed by Israeli soldiers, an IDF official said, and attempted to return to Gaza via the tunnel, at which point an Israel Air Force plane destroyed the entrance to the tunnel.

In the early morning hours of Thursday, the army said, IDF soldiers identified a group of 13 terrorists attempting to enter Israel via a tunnel in the southern Gaza Strip. The tunnel was one of several the IDF had recently uncovered that were to be used to smuggle terrorists into Israeli cities.

IDF soldiers attacked the group. Several of the terrorists were killed on the spot. The tunnel has been destroyed, as well. In a statement, Hamas accepted responsibility for the attempted attack, claiming that “all its operatives had returned safely.”

An IDF spokesperson said that the army had prior knowledge that the terror attempt would take place, and was ready for the group. The group was heavily armed, and had they gotten past IDF patrols, would have been able to commit a major terror attack, killing many people and nabbing hostages, the spokesperson told Israel Radio.

Last week, the IDF struck several terror tunnels in Gaza, stating that the move prevented a steady stream of terrorists into Israel. Shortly before the tunnel was destroyed, one senior IDF official spoke about the discovery to Arutz Sheva on condition of anonymity. “We recently found a significant terror tunnel leading out of Gaza, which we are gathering intelligence about to prevent further terror attacks and to prevent [the tunnel] from being used [again],” the official said.

In a statement, the army said that “The IDF is prepared to defend the citizens of Israel from any threat and will continue to act decisively and as long as necessary until peace returns to daily life.