“Do you think that the people of Israel need an army?” Cohen asked during a sermon. “It is God almighty who fights for Israel.” 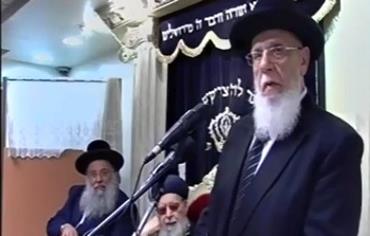 The foremost religious arbiter in the ultra-Orthodox Sephardic Shas movement raised eyebrows on Wednesday when during a special prayer held at Jerusalem’s Western Wall for IDF soldiers, he remarked that “Israel doesn’t need an army.”

The comments by Rabbi Shalom Cohen, the man who succeeded the late Rabbi Ovadia Yosef as spiritual leader of Shas, drew rebukes from secular Israelis as IDF soldiers continue to operate in the Gaza Strip on the 17th day of Operation Protective Edge.

“Do you think that the people of Israel need an army?” Cohen asked during his sermon. “It is God almighty who fights for Israel.”

When stunned worshipers asked the rabbi to offer a blessing for IDF troops, he replied, “Do you think you are fighting? I am fighting for you. We screamed out to God: ‘Save us without inflicting anymore sorrow on the people of Israel’.”

The head of Hiddush, an organization that champions religious freedom and equality, lambasted the rabbi for the comments.

“If the country doesn’t need an army, then there’s no doubt that the yeshivas and Torah students don’t need budgets from the treasury,” Uri Regev, the director-general of Hiddush, said. “From now on, they can put their faith in the Lord when it comes to asking for money to fund their education systems. We will help the ultra-Orthodox in saying earnest prayers for money to start growing on trees.”

“At the end of the day, most of us believe that we do need an army, but we are quite uncertain as to whether we need Shas,” Regev said.