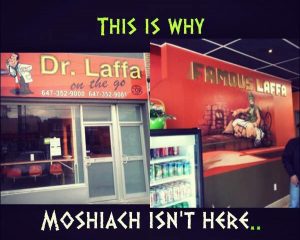 A couple of years back I wrote a review on Dr. Laffa (I still cannot believe it’s close to three years later – time flies). Since then I’ve gone back and enjoyed their selection, and even celebrated one of my birthdays there. I stand by what I originally stated: that the ambiance is as close to being in Israel without being in Israel. Dr. Laffa was being run by two partners, Yoram Gabay and Sasi Haba.

Since that review, a number of things have happened. For one, Dr. Laffa became so popular that they expanded to a takeout location by Bathurst and Dell Park which I frequented. Yoram Gabay was managing the south location and Sasi was running the north location.

Then, stuff happened. Like most partnerships, Yoram’s and Sasi’s split up. Like the vast majority of restaurants, Dr. Laffa was knee-high in debt from suppliers. Sasi chose to partner up with one of the suppliers and like many partnerships, end his with Yoram. They also had different visions: Sasi wanted to re-brand and expand to the non-Jewish market with treif locations (as that’s where the money is – though leaving two kosher locations as Famous Laffa Kosher) and Yoram wanted to keep his locations completely kosher.

What made it ugly was that when Sasi partnered up, rather than leaving Yoram with his locations and moving elsewhere, he essentially appropriated both stores and forced Yoram to start his Dr. Laffa business elsewhere. He had no choice but to move two stores down. From what I’ve been informed, there’s currently a Din Torah underway. Hopefully they will decide on what’s right. Meanwhile the COR is still giving Kashrus certifications to both locations.

So that’s that for now. Dr. Laffa is still running the takeout location by Bathurst and Dell Park and strongly encourage that enjoys middle eastern food to go there.

As an aside, I noticed a couple of ironies when I last visited Dr. Laffa:

a) Looking through the windows I noticed people without Yarmulkes at Famous Laffa Kosher and people with Yarmulkes and beards at Dr. Laffa. I know that one shouldn’t judge based on appearance, but I’m just saying.

b) The only store separating the two are Friedman’s fish. A cute thought went through my mind in that according to Halacha (Shulchan Aruch), you are not allowed to mix meat and fish together. Here you have a fish store in the middle, not mixing with either meat store and keeping the two separate. 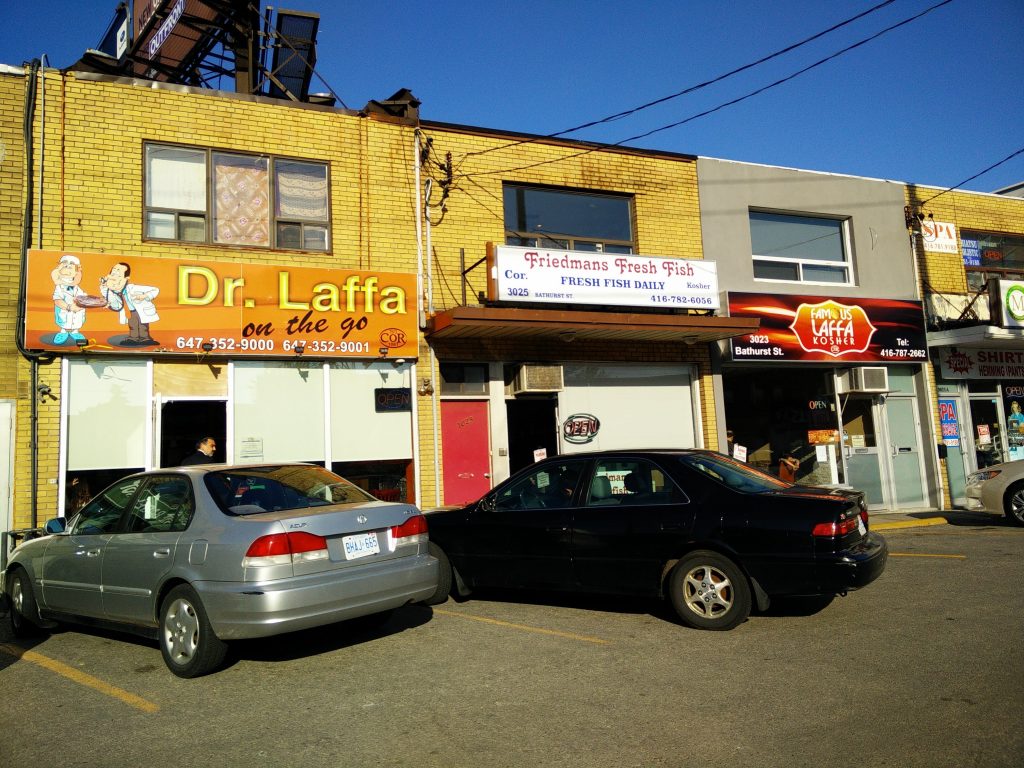 Friedmans Fish is the only store keeping them separate.