Once upon a time, in the silly world of Chelm, a salesman was passing through. “I am selling one of the most remarkable vehicles of all time!” he announced. “This car travels without mules, horses, and even without gasoline. It works only on electricity!” he said as all the citizens of Chelm gathered around the salesman.

Chaim Yutz, one of the brighter and wealthier citizens of this silly community, stepped forward and said, “I will be the first one to buy this invention. If it proves to do what you say it does, you may return at a later date and sell others.”

He paid the salesman and drove the car home. A few weeks later he decided to take a trip in his new automobile to Minsk, which was some 500 miles away.

“This will be the perfect test!” he told the Sage of Chelm, the wisest of all.

And so it was, Chaim Yutz started out from his tiny village. The weeks passed and there was no word. Then lo and behold, one day the tiny vehicle appeared on the horizon.

:”He has returned from Minsk!” the children shouted with glee.

In a few moments, Chaim was back in the village square and everyone crowded around him.

“Nu, so tell us about your trip. Did the car do what the salesman said it would do? Did it run without mules or horses and even without gasoline?”

Chaim shook his head and proudly announced, “The car did exactly what the salesman said it would do! It rode beautifully, without mules or horses, and even gasoline. And it is true that it runs on electricity. I was able to make that trip in half the time it would take with horses. But it is a good thing I am a rich man – because that trip cost me a fortune!”

“Why should the trip cost you a fortune?” they asked. “There were no horses to feed, and no gasoline – the car ran on electricity, no?”

“Of course,” Chaim Yutzz declared. “But you should see what I had to spend on extension cords!”

And so it was, ’till this day in the silly village of Chelm, whenever anyone buys a car, they have to be guaranteed the car will run from Chelm to Minks without an extension cord!

Reprinted from the Silly World of Chelm. 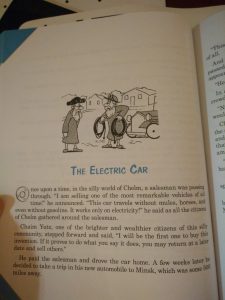 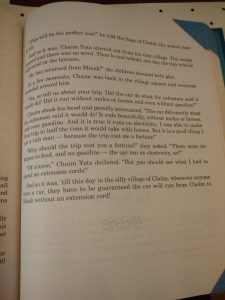