Excerpted from “Maran; The Life & Scholarship of Hacham Ovadia Yosef” 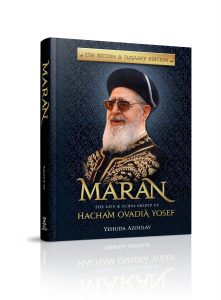 Hacham Ovadia’s care for people’s physical well-being was demonstrated not only through his blessings, but also through advice that he gave, individually and in his broadcasted lectures. In this context, he used his widely-broadcasted Motzae Shabbat sermon to influence his followers to give up smoking and to raise awareness of the dangers of second-hand smoke.

He told a story about Rabbi Yisrael Salanter. One of the rabbi’s students left the synagogue for a few minutes on Yom Kippur and when he came back, the Mussaf prayer had already begun. The door was open so the crowded congregants would have some fresh air. As it is forbidden to walk directly in front of people praying Shemoneh Esre, this student prayed in the entrance. In the middle the Mussaf prayer, Rabbi Salanter approached the man and whispered, “You are stealing people’s air. You are stealing on Yom Kippur!”

Hacham Ovadia compared this with the more serious offense of smoking in the presence of others and poisoning their air. He stressed that especially taxi drivers, whose passengers are at their mercy, and teachers, whose students cannot stand up for their right to clean air, should be careful not to smoke. “Perhaps it is not technically forbidden,” he said, “but what did the child do to you?”

Hacham Ovadia’s father-in-law regularly smoked two packs of cigarettes a day. Hacham Ovadia showed him a quote from the Amude Ohr which outlines the damage smoking causes to the lungs. His father-in-law admitted that he knew it was bad for him, but he didn’t know how to stop.

Hacham Ovadia also offered him candies to suck on when he had the urge to smoke, saying, “This way you can make a blessing, too!” Slowly, he weaned his father-in-law off his two packs of cigarettes.

Every one of us who can influence a family member to stop smoking must do so! Use all the power of persuasion and influence that you have. Think of it as watching your relative eat poison; you would desperately try to stop him. Smoking is just a slow kind of poison.

Moreover, many smokers cough so much at night that they cannot sleep. A person who doesn’t sleep at night has no strength in the morning. G-d created human beings with the need to sleep at night because the body needs rest. A smoker who coughs all night robs himself and his household of sleep.[1]